Weekend Recap: A Punk, A Heartbreak & A Rumor
Advertisement

It’s been a while since we have had an over abundance of sports headlines to discuss. So much so we had to consolidate it all into one article.

The weekend brought along interesting developments in each of the major sports. But 2 of the 3 topics we touch on here have to do with the sports not often mentioned at the major sports networks.

Who would have thought that on SportsRantz we would be focusing on 3 of the biggest stories and the topics would be a WWE match, Women’s Soccer and a Trade Rumor in baseball?

Sure there were other newsworthy topics but these 3 stories stole the spotlight and also impacted their respective sports more so than the run of the mill daily news thread.

It’s been a while since “Pro Wrestling” has had a really intriguing topic of interest. And please let’s differentiate between a buzz story and an actual news story. Snooki “Oompa-Loopa” Polizzi waddling around a ring at WrestleMania 28 is NOT a news story. But how CM Punk just flipped the wrestling world upside down, is.

Most of you read my blog post about CM Punk’s now legendary shoot promo he cut a couple of weeks ago on Monday Night RAW that was both passionate and edgy.

It all came to a head this weekend at WWE’s PPV “Money in the Bank”. In the past the WWE has failed to deliver what the fans have been clamoring for. Year after year WWE would at times develop a somewhat decent storyline of angle only to sorely disappoint it’s fans and pro-wrestling enthusiasts.

But they hit pure gold with CM Punk. Instead of letting it piss away in the wind, WWE embraced and seemingly delivered. At the end of the PPV many would assume that John Cena (or “SuperCena”) would make an improbable comeback and retain the title as he does at every WWE event. There was no way CM Punk was going to leave that night and the WWE (his contract expired last night) with the WWE title.

But WWE did the improbable, they delivered the unexpected. They heard the passionate crowd in Chicago, the responses on the internet dirt sheets and delivered. They teased a “Montreal Screwjob” and a “typical WWE ending” yet still delivered what the fans wanted. CM Punk (one of the best, if not THE best in the business today) won the title clean and ran out of the arena as the champion of a company he no longer worked for.

CM Punk is one of the best workers on the mic, with the media and in the ring. It didn’t take him long after his win over John Cena for the WWE title for him to take to Twitter to ask “it’s 12:00 do you know where your WWE title is”? Brilliant!!! He even tweeted this pic.

It’s time for you to take your twitch channels to the next level. Build your audience, bring more people to your gameplay and more customers to your fitness streams with the power of a networking community that brings innovative features tot he forefront.

Another surprise, soccer actually stole the spotlight this week. Women’s soccer at that. While a nation tuned in to a magical run by the United States Women’s soccer team to the World Cup Final a huge realization hit the American people; “We are watching soccer”.

Shocking I know! But for what it is worth Hope Solo, Amy Wambach and the rest of the US Women’s National Team gave us promise that a soccer World Cup was very possible for the United States.

As the head into Sunday’s Finals match against Japan (a team they never have lost to) America seemingly had a cake walk to the Cup. It was only a matter of time before the Americans would be doing their Media Rounds with the World Cup in hand as America pretended for 5 minutes that Soccer was a sport that really mattered to Americans.

But with under 4 minutes to go in a game the American’s were leading 2-1 and seemingly had “in the bag”, the roof caved in.

Japan, the under dog, came back and stole victory from the jaws of defeat and stunned the Americans.

We tend to love the come from behind, under dog story. Japan as a team and a country gave the World that such thing. A country ripped apart by tragedy this year and a team that was the proverbial “David” facing “Goliath”, Japan showed it not only deserved the Cup more than anyone else but showcased a true championship heart.
Ubaldo Jimenez Trade?

Then there is the big news of a trade rumor. Ubaldo Jimenez who last year was considered one of the most dominant pitchers not only in the National League but also in the Majors, is being shopped by the Colorado Rockies. 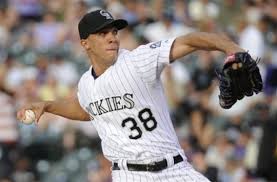 And it’s no surprise who is the leading candidate to get him. The New York Yankees.

But Jimenez isn’t exactly have a typical “Ubaldo Year”. His ERA balooned and he has seemed to struggle and labor through a underachieving year.

He pitched very well the past month and posted a sub 3 ERA during the past several weeks. He also had a very strong outing at Yankee Stadium that gave Yankee fans a taste of what may be coming.

But just like Cliff Lee, Roy Halladay and Johan Santana will the Yankees balk when the asking price soars?

Surely the Yankees will be asked to include stud prospect Jesus Montero and may also be asked for Ivan Nova. But is that too much? Stay tuned for a blog later this week where we look into this.

So as the weekend passed these are my 3 major headline stealers. What are yours?