Boxing careers are a long journey. Many boxers spend years climbing the ranks before ever making an impact or having a shot at a big money fight. Rarely do we see an up and coming boxer tear through the ranks and put the entire boxing world on notice.

But after watching J’Leon Love vs Rufus Defibaugh I realized that maybe a new boxer is doing just that.

When you watch J’Leon Love in his bout with Rufus Defibaugh you see a boxer with poise. A boxer in control. A boxer with a complete comfort and command of the ring. Using the ropes and the center of the ring at opportune times, using each to his advantage to disable his opponent, taking punched and dishing them out as well. 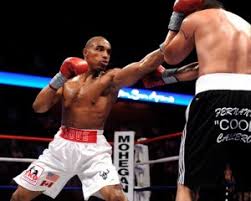 But Love does something that may end up separating him from other boxers. In a sport and a world is used to fast paced results and instant impact, Love strategically breaks down his opponent not only setting him up for his own attack but drawing the opposing boxer into committing detrimental mistakes that profoundly impact the bout.

It’s that skill and precision that has Love on the fast track to a bright, promising future. With each hook, jab and counter punch Love stamps his ticket to the land of success all boxers aspire to travel to.

Love knows he has a strong game in the ring too – “My strengths in the ring are definitely my speed, power, and ability to break my opponent down mentally and physically” Love said.

It’s that very style that made J’Leon Love fall in love with the sport of boxing.

“I have always been a athletic person but that one on one combat just made me fall in love with the sport of boxing. My major boxing influence is Marvin Haglar, he was such a respectful intelligent guy out the ring but in the ring he was such a monster.” Love would say.

Although Love is on the path for a exciting future he still remembers his first bout:

“My first fight was when I was about fourteen years old I had trained at the Detroit Kronk Boxing Gym during the time. I had trained for about one year before my first fight, I have had tons of sparring, lots of road work, and loads of sit ups. I was extremely nervous moments before entering the ring but I knew that boxing was exactly what I wanted to do. I was so pumped up and ready to fight i went into the ring and gave it all I had and I was the victorious one at the end with a second round KO”

When remembering what inspired him to decide to pursue a career in boxing,  Love quickly points to a match between “Marvelous” Marvin Hagler and Thomas “Hit Man” Hearns for the middleweight title over 25 years ago. A bout many considered to be an epic battle that redefined boxing for a new generation of fans.

Love points to that bout as one of his favorite matches and inspiration for wanting to become a professional boxer: “The one fight that I saw that really sealed the deal with me wanting to box was the Haglar vs Hearns fight. The fight lasted a couple of rounds but it was so electrifying.”

Int e sports journalism world it is no secret that many have stock in the belief that Boxing is suffering from the popularity boom of MMA. MMA seems to pose a true challenger to the sport of Boxing. But Love disagrees: “MMA and Boxing are both great combat sports, I don’t think MMA could ever take the shine from boxing because at the end even though both sports are combat they are much different from each other. I think together both sports will help each other grow. Boxing will always have a lead over MMA.”

With an 8-0 undefeated record Love is looking to take the next step in becoming a force in boxing. “My next fight is Oct 1st in Atlantic City NJ on the Sergio Martinez vs Darren Barker on HBO and this will be my first six round fight. My Team and I are taking my career to the next level and will be more then ready for it. In the next five year I will be the pound for pound middle weight world champion and be successful in and out of the ring.” 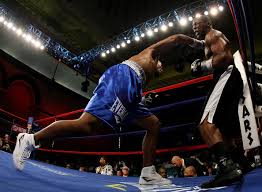 With the dedication, drive and talent that Love seemingly possesses it’s simple to recognize the obvious potential. But boxing is in need of a new force and an era of boxers that can deliver us the epic battles that inspire boxing fans again. The same fights that inspire boxers to fight in the first place, just like Haglar vs. Hearns did for J’Leon Love.

On the rise and with loads of potential J’Leon Love seems to be a safe bet to make an impact in the sport of boxing. The exciting part of this is that we may be on the verge of witnessing something special. ~Anthony DiMoro (special thanks to JR Rickert)