A Case of the Sundays: October 17th, 2011
Advertisement

Another exciting week of NFL action is in the books and we are left with a better understanding of the “contenders” and the “pretenders“. Tons of things to get to, lots of on-field and off field action and a bevy of interesting story lines kept this particular Sunday intriguing from start to finish.

Sunday also helped show us who the very good teams are and also showed us who the teams are that still have a lot of work to do. It also had it’s fair share of injuries not only on the field but on the sideline as well. New Orleans Saints coach Sean Payton broke his leg and tore his MCL. Payton fell to the ground and got his leg caught underneath Saints tight end Jimmy Graham when he was tackled by a Bucs defender early in the first quarter a game the Saints would end up losing.

Some exciting games with equally exciting finishes, so let’s get down to it shall we? 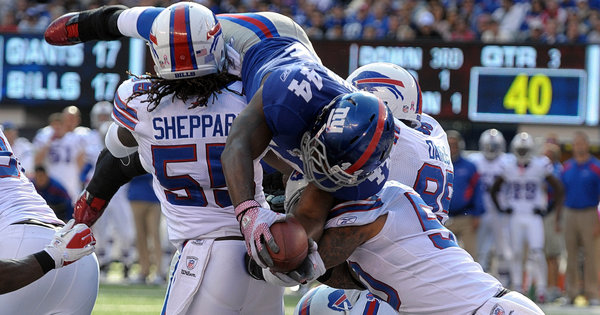 The New York Giants ran past the Buffalo Bills

From week to week it’s safe to say that you never know which Giants team will take the field. Some weeks they look very fluid, efficient and downright potent. The next they look like a blind kid with a rubix cube.

This week the New York Giants knew the key to beating the Buffalo Bills was not to turn the ball over. Something the Bills have taken advantage of en route to a 4-1 record to start the season scoring around 14 points a game off of turnovers.

The Giants didn’t just limit their turnovers, they didn’t turn it over at all. Lawrence Tynes kicked a go-ahead 23-yard field goal with 1:32 remaining to give the Giants a 27-24 victory.

The Giants also did it behind a season best rushing day from Ahmad Bradshaw. Maybe not the running game will elevate to a new level if Bradshaw can be consistent.

Buffalo boasts a 1-2 record on the road and has a bye week to shake off their recent losses to the Bengals and Giants. A return to Buffalo in 2 weeks to host the Washington Redskins should help them get back in sync.

Defense is the Best Offense

Just ask the Cincinnati Bengals who now have a surprising 4-2 record after beating up on the helpless Indianapolis Colts who are battling the Minnesota Vikings for claim to the “NFL Whipping Boy” title.

The Bengals have the NFL’s #1 ranked defense and it has been a major factor to their impressive start. The Bengals continued to capitalize on the mistakes of other teams cornerback Nate Clements blocked a late field goal try that would have tied the game and Carlos Dunlap returned a fumble 35 yards for a score.

But just as impressive as the defense has been, the young Bengals offense has been almost a impressive. Andy Dalton has had a successful rookie campaign at QB throwing for over 1,300 yards with 7 touchdowns and 5 interceptions. Rookie Wide Receiver Aj Green has been making a strong case for Rookie of the Year honors with his impressive campaign of 29 receptions and 4 touchdowns. On top of that the Bengals have a developing young tight end in Jermaine Gresham.

But as exciting as the Bengals strong start as been they now enter a tough stretch in their schedule after their upcoming game against the Seattle Seahawks. After they venture to Seattle they visit Tennessee, host the Steelers, head to Baltimore to play the Ravens, host the Browns, visit Pittsburgh and then host the Houston Texans.

Jim Schwartz is a Fool 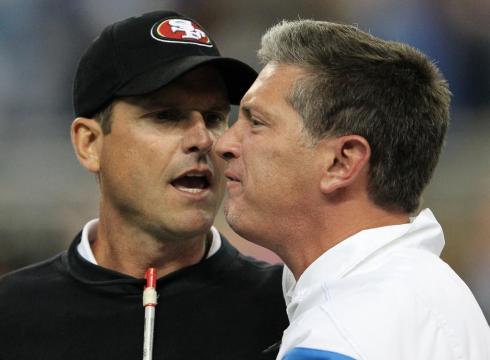 Now let me start this off by saying this. I think it’s a shame that this story overshadows a great game between two up and coming teams that I have been pulling for all season. Face it, it’s hard to hate the Detroit Lions and the San Francisco 49ers. Both franchises have had their fair share of long-standing misery and both teams are doing pretty darn good this year.

But what happened after the game was just downright stupid.

I understand the passion that 49ers coach Jim Harbaugh displayed after the game may have rubbed a few people the wrong way, but was it insulting? No. Apparently, Lions coach Jim Schwartz felt differently.

After an exuberant handshake and slap on the back from Harbaugh to Schawartz, and obviously peeved Schwartz went after Harbaugh. He bumped his shoulder into Harbaugh before both teams came over to separate them. Schwartz looked insane and acted even more crazy as he repeatedly tried to push and shove his way through players to get at coach Harbaugh.

Now the reason I think Schwartz is in the wrong here is quite simple. This is the same Jim Schwartz that is overly demonstrative on the sidelines full of fistpumps, constant displays of cussing out of officials and even taunting opposing players from the sidelines. If anyone can be accused of being out of line with behavior it’s Schwartz. So for him to raise issue with a simple excitable handshake from Harbaugh is like the pot calling the kettle black.

This was a heck of a game and I think this may have kickstarted a new rivalry in the NFL. But let’s keep our mouths shut Schwartz, you don’t look “right” you look insane! 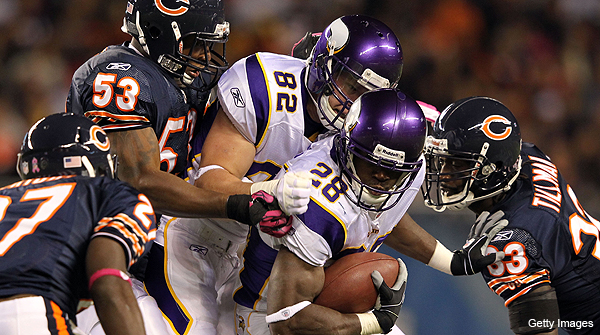 Now I’m a Dolphins fan and if any franchise owes a fanbase an apology it’s the Miami Dolphins. But there can be a case made for the Minnesota Vikings.

A few years ago they were stacked with a young and explosive offense with the likes of Adrian Peterson, Sidney Rice and Percy Harvin. They also had a solid defense in tact with Jared Allen, Pat Williams and Kevin Williams.

Unfortunately they brought in worn down veterans and put all the weight of their franchise on their shoulders. Brett Favre was a one hit wonder in Minny and Donovan McNabb has been atrocious (the nicest way to put it).

They were once considered Super Bowl favorites in consecutive seasons, even making it to the NFC Championship. But the Vikings pissed away their golden opportunities with bad personnel moves and a bit of disorganization. The Vikings had a stock of young players but acted like they had to win right away instead of building upon their great foundation.

Yesterday the Chicago Bears, a team ranked 21st in passing yards and 20th in rushing yards steam-rolled the Vikings 39-10.

I know my Minnesota Vikings fans won’t like to hear this but it’s time to clean house and rebuild. And the timing is perfect.

Tebow the Lead Steed in Denver