Give an Idiot a Platform and....
Advertisement 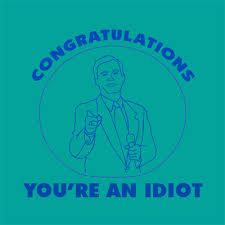 Chances are if you give an idiot a platform you will more than likely be subjected to idiotic statements. But Saint Rose Chronicle journalist Abby Finkelman takes idiot to a whole new level.

I came across Mrs.Finkelman’s post on the 18th titled The View from Venus: Sports and the Culture of Rape and was immediately disgusted. Take a minute and read this article.

In it Finkelman starts off her ridiculously opinionated article with the following:
“If you want to harass, assault, or rape a woman, I suggest being an athlete. Not only will people be inclined to believe you when you deny it, they will help out by calling your accuser a slut, insisting that she must have wanted it, and possibly sending her death threats.”

She asserts that “sports culture and rape culture are deeply linked” all with strong undertones of sexism and hate. What Finkelman fails to realize is that the only “rape” that her article truly illustrates is her raping of any journalistic integrity. It’s a sad attempt at getting across a view that probably could have been verbalized much more intelligently.

The Saint Rose Chronicle as well as the College of Saint Rose should be ashamed and embarrassed by this offensive hate spewing.

What’s troubling is that while she seemingly takes the stance in her article of attempting to defend victims of rape, she does so by spewing insulting, unintelligent and disgraceful emotions that many would say is the foundation for most hate crimes.

While I am not in the sports industry as an athlete I strongly disagree with Finkelman’s comment that “sports culture and rape culture are deeply linked“.

In the real world Mrs.Finkelman it’s generalizations such as yours that have been the foundation of many hateful statements and acts throughout history and some of the very cases you reference in many of your articles.

In fact I would suggest that your backwards thinking is exactly some of the issues that have troubled not only the country but the world over the years.

While you point the finger at athletes and men mostly, you fail at acknowledging other job fields that have been in the public spotlight for sex crimes. The Educational Profession is one. If you took the time to actually conduct yourself as a journalist and do some research you would have found this out yourself. I simply Google’d it:

Let’s move on to another profession….Religion:

The fact that this information is so accessible tells me your motivation isn’t to act as a feminist (as you proclaim) and isn’t to combat sexual harassment, rape or abuse against women, no, your motivation is to hate. And your hate is towards men.

In the midst of your article you pointed to a few cases as examples of sex crimes against women in the sports world. But this only showcases your own narrow minded perception. The criminals aren’t always women as you may want to believe or have your readers believe.

Clearly you’re not familiar with a case in 2010 of a female coach, Kasia Hart, sexually assaulting a 13 year old female player – Read Here

Or the story of Claire Lyte, a lesbian tennis coach who was accused of raping a 13 year old girl – Read Here

But you probably dismiss those examples because sexual abuse and criminal sexual acts only deserve merit when a male athlete or a male in general is the accused.

It’s sad that someone would use the platform of a college newspaper to call out what she feels are evils only to publicly stereotype people herself. Never battle hate with hate.

If I were a woman I would be ashamed to have Finkelman represent a voice for women’s rights and I would venture to believe most feminists would agree with that sentiment. In fact I feel that taking her point of view would do a major disservice to any movements.

The truth of the matter is Finkelman is that crimes are committed by criminals. People of all walks of life are capable of raping and being victims of rape. Men, Women, Athletes, Cheerleaders and everyday people like you and I. Hate is a universal emotion. It’s not confined, as you suggest; “I suspect it is a combination of the team effect, rabid fans, and a generally “macho” atmosphere“. It has no borders, regulations or restrictions of race, age, sex or lifestyle. Hate is not sexist, like you are.

While you claim to be a “Feminist” you clearly have no idea what that means. According to Wikipedia:

Feminism is a collection of movements aimed at defining, establishing, and defending equal political, economic, and social rights and equal opportunities for women. Its concepts overlap with those of women’s rights. Feminism is mainly focused on women’s issues, but because feminism seeks gender equality, some feminists argue that men’s liberation is therefore a necessary part of feminism, and that men are also harmed by sexism and gender roles. Feminists are “person[s] whose beliefs and behavior[s] are based on feminism.

Notice the main point of being a Feminist is to establish equality and “feminists argue that men’s liberation is therefore a necessary part of feminism“. Clearly you skipped over all of that. So calling yourself a Feminist is an absolute insult to the name. Stop! You’re a problem more than a solution.

Furthermore your responses to the comments on your blog are further proof that you yourself are a hate-filled person. Nicolas Martin made a rather valid point to refute your claims, your response?

“Who are you, anyway, Nicolas Martin? All I can see from your Facebook page is that you live in Richmond, IN, and hold political views that I suspect don’t make you predisposed to agree with much of anything a feminist has to say. Well, I say “suspect”. You’re a “fan” of antimisandry.com, whose tagline is “Curing Feminist Indoctrination”. So, actually, I *know* that you’re predisposed to disagree with what I write here.”

While you’re quick to point out the wrongs in others actions you are not above making a quick judgement, stereotyping and then forming a rather insulting opinion of a person.

Frankly speaking, if you’re basing your judgements of people off of what is on a Facebook profile I suggest you find a new line of work where you do not work one on one with people.

No company with a Human Resources Department would touch you nor would they have the funds sufficient to defend themselves legally when you use this conduct in the workplace and induce a lawsuit.

But allow me to save you the time of making your judgements about me. In fact I can do it for you, allow me to take a few seconds to dumb myself down a bit so I can try to think as you would.

I’m A Rapper – This probably means I fall into your “rape culture”. We all know the content in rap songs. This would also mean I’m unintelligent, have a criminal record and have multiple kids with multiple women.

I Have Modeling Pictures on my Facebook – This probably means I have some insecurity about myself that I have to post pictures like this. In fact maybe I need the attention or some validation to invigorate my confidence or sense of self worth. This probably means I’m a rather weak person who thinks too highly of himself. Typical man right?

I own SportsRantz.com – Naturally you will see I own a social networking site for sports fans, so therefore my opinion will be tossed out the window. I’m part of the “rape culture” you have so cleverly outlined.

I’m a Man – 4 strikes. I’m the recipient of your hate. I’m the root of all the issues in the world today.

College Dropout – I have no college degree hanging in a frame on my wall. I guess this limits my chances for success in life huh? It also dismisses my opinion because I clearly don’t have the intelligence (or lack there of) or credentials to dispute you.

Little do you know Finkelman that what appears on the outside rarely is the same as what lies within. So by all means Abby, go ahead and Facebook me and make all the judgements you need to make to dismiss my opinions. If it creates some sort of satisfaction for you then by all means, have at it.

It’s people with your point of view and demented skew of perception that cause more harm than good. It’s those opinions and that conduct that does more hurt than it ever helps.

But what’s most insulting is your lack of intelligence in composing this piece. I would think an article of this nature would have gained you a ton of positive light if you looked at the issues of sexual crimes in the sports world with thorough research and seeing things from both the male and female sides.

Instead you merely toss up a couple quick references in 7 paragraphs that lack any substance. Instead it’s just a close minded, sexist, pig headed ramble that reeks of deep rooted hate.

Maybe next time your judging someone by their social media profile or practicing your warped perception of “women’s intuition” you should look in the mirror. The person you see doesn’t think much differently from the people who commit the crimes you feel so passionately about.

But maybe because I’m a man I’m not in any position to have an opinion.

If the Saint Rose Chronicle has any moral fiber and if any of their journalists have respect for their own work (most importantly the female writers) Abby Finkelman will be removed from the paper and the article removed from their website. I’m not disputing that a suspension would be justified either.

But then again, I’m just a man so what do I know?

If you feel the same way I do, let the Chronicle know:

Any comments, corrections, questions or suggestions can be sent to:
our e-mail:
chronicle@strose.edu

LSU vs. Alabama – The Game to Watch in College Football this Saturday