You can put away the chatter about when Tim Tebow will start, the day has fallen upon us. Today the Denver Broncos officially named Tim Tebow the starting quarterback in place of Kyle Orton.

It can certainly be said that Orton has had a very poor start to the season. The Broncos can’t complete 3rd downs and have struggled to notch wins in the left side of the column posting an unimpressive 1-4 record.

Although Denver has been feeling the pressure to see exactly what they got in their 1st Round pick in 2010 are they rushing this decision a bit too fast?

Why Denver is Making the Right Move

A 1-4 record is pretty disappointing and frankly means your playoff chances are pretty much non-existent. So why not see what you have in Tim Tebow?

Tebow replaced Orton in the second half against the Chargers trailing 23-10. Surprisingly, Tebow provided a great spark that led to a nice comeback attempt. They would eventually lose 29-24 as Tebow’s hail mary end zone bomb fell incomplete. He threw one TD pass and ran for another score. Orton finished with 6-of-13 passing, 34 yards and an INT in the first half of Sunday’s game.

Almost beating a good team like the San Diego Chargers should speak volumes as should Orton’s dismal play. So far this season Orton has thrown for 979 yards, 8 touchdowns and 7 interceptions. But what is most alarming is his 6 picks in the past 3 games (5 picks in two games) and a completion rate of 58.7%.

Tebow on the other hand seemed to really energize rather lethargic Denver Broncos team. The one major difference between Tebow and Orton is the mobility. Tebow has displayed the talent, ability and creative playmaking factor that Orton fails to possess. On Sunday alone Tebow rushed the ball 6 times for 38 yards and a touchdown.

One certainly cannot ignore the fact the Broncos are ranked 27th in Total Passing so far this season. They also can’t ignore Tebow’s resume, he is a winner and has been everywhere he has played. You can’t teach that with coaching.

Today’s standard in the NFL seems to indicate that mobility isn’t just an added perk at the Quarterback position but almost a necessity.

As the Broncos head into the remaining games it’s important to see what they have in their 1st round quarterback. It’s safe to assume that Denver will have a good shot at a Top 10 draft spot. If this current quarterback situation isn’t investigated than it leaves a lot of pressure on the Broncos come Draft Day. 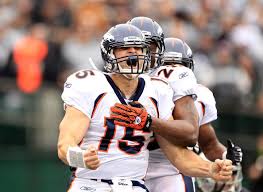 The Broncos are making the Wrong Move

As bad as Orton has played it’s not all his fault. The absence of a prolific running game has certainly hurt the Broncos’ offense. Currently ranked 20th in the league in Team Rushing Yardage, the Broncos have had little to no production from Knowshon Moreno who has only managed 26 yards this season.

Denver has instead had to rely heavily on veteran Willis McGahee who has filled in admirably but is not a premier back at this stage in his career.

The Denver Broncos aren’t helped by their defense, or lack there of. Currently, they’re ranked 25th in Total Defense and give up a whopping 385.5 yards per game. Only 7 other teams give up more yards than the Broncos (Colts, Rams, Dolphins, Raiders, Patriots, Bills & Bears) a good percentage of those teams have winning records.

Although Tim Tebow provided a spark he did via his legs more than he did with his arm. Aside from his stout rushing yards Tebow only completed 4 of 10 passes for 79 yards. Although he threw one touchdown a 40% completion percentage won’t translate to many victories.

It’s been well publicized how Tebow has had to completely rebuild his throwing mechanics, never a promising sign for an NFL Quarterback.

What stand out more to me is this; The Denver Broncos are doing this out of sheer panic than basing it on performance and talent. Their record is putting pressure on the Broncos to make this hasty move. I am almost certain the Broncos organization and fans would much rather have Tebow take the reigns from Orton because he is outplaying him in every aspect of the game.

So now the question is this sports fans…..

What do you think of the Tebow move?