I'm Just Not Buying It
Advertisement

It’s been a few days since the firestorm now known as the Penn State sex scandal started gaining momentum. It’s unfortunate to see a storied and legendary career come to such a horrible and disgusting end, I for one thought and believed Joe Paterno deserved better.

But as I sit in the SportsRantz.com Office and type away at this blog post I am glad that I did take the time to wait a couple of days to really soak everything in. Katy and I discussed it a bit on the Rantin & Ravin’ Show on SportsRantz Radio this past Tuesday but it really wasn’t all out yet.

I’m glad I waited because I thought something like this subject matter deserved a bit more than a typical knee jerk reaction. It also has allowed me to look at things from a different perspective. And I drew the conclusion, that I am just not buying it.

This is first and foremost the most irritating thing to me. Beloved as Paterno is in the community and regardless of how much Paterno has meant to Penn State as an educational institution and a football program, he is not above responsibility.

For whatever reason there has been a coddling of Paterno in this matter. Don’t misconstrue my message here, I am not calling for a witch hunt for Paterno. Im not calling for Paterno to be hunted down and crucified like some hardened criminal. But I’m not supportive of the lax treatment.

Let’s be honest about the matter at hand. It comes down to children being sexually abused on Paterno’s watch. As an educator and someone who as high up as Paterno more due diligence was deserved and for that Paterno should be ashamed of himself.

Grant it Paterno was not the person committing the crime but he didn’t do his job when it came to protecting his students. For those of you saying “yes he did”, he clearly didn’t do enough now did he? According to reports he had since 2002 to do something (when Mike McQuery reported witnessing Sandusky’s conduct) , is 9 years not enough time to alert authorities?

A statement from Paterno:

“As my grand jury testimony stated, I was informed in 2002 by an assistant coach that he had witnessed an incident in the shower of our locker room facility. It was obvious that the witness was distraught over what he saw, but he at no time related to me the very specific actions contained in the Grand Jury report. Regardless, it was clear that the witness saw something inappropriate involving Mr. Sandusky. As coach Sandusky was retired from our coaching staff at that time, I referred the matter to university administrators.”

If Joe Paterno had no issue taking a paycheck from Penn State which came directly from the students he recruited, from the parents who entrusted him with their child, he should’ve did everything in his power to protect them and ensure this matter was properly dealt with.

So I’m not buying this coddling of Paterno. When it comes down to it, he is a head coach of a college football program. He is not a messiah, he is not a savior, this is merely sports. So regardless of his tremendous impact in the world of sports (which cannot be argued) it does not grant Paterno some immunity to a hellacious backlash.

And if you believe it does, than I just don’t see your reasoning and I have to be honest I don’t want to.

The Students at Penn State

I understand why people at Penn State feel so passionately about Paterno leaving. In another aspect I guess I don’t, simply because I am not apart of that culture and never have been.

But as students gathered outside of Paterno’s home and on campus chanting “We Want Joe” I was touched and moved by what I was seeing. The pure love that the Penn State community has for Paterno is truly something I don’t recall witnessing before in my lifetime.

But just like many college student gatherings, things got out of hand and a bit chaotic.

So it made me question what exactly are the students gathering for? If it was truly for the love of Joe Paterno and respect for his work at the university than a few chants of “we love Joe” would have sufficed. Maybe even a  constant wave of peaceful chants to show support and love.

But this chaotic circus is not only disrespectful to Paterno, but also to the families of the abused students.

I understand I won’t make a lot of friends with the following comments, but I am being honest to how I feel about the situation. I just don’t buy Paterno’s apology.

In my eyes Paterno is only sorry this blew up as much as it did and took him down in the blazing fire. Don’t agree? Then explain to me why he didn’t resign immediately.

I’ve heard numerous excuses to defend why Paterno didn’t and why he wasn’t required to quit immediately. But let’s be serious folks.

So Paterno was fine with staying on at the end of the year? In his original statement Paterno stated he didn’t want the board of trustees to have to deal with his dismissal so he opted to retire at the end of the season. Really? Just who are you doing a favor for?

What that says to me is Paterno was willing to take his glorious ride off into the sunset with all the fanfare and the cheers. The love showering down on him, the admiration spilling over from the fans in the stands. All of this at the expense of the victims.

Paterno was willing to bring this media circus upon the university all season. To have his students, players and colleagues questioned constantly and have the victims have to see this front and center on the news every single day Paterno roamed the halls of Penn State.

Drag these victims through more of this crap so Paterno can have his “proper” sendoff. Yet you’re sorry?

If you weren’t worried about your legacy and your image and more worried about the actual victims you would have removed yourself immediately and let this circus run it’s course. But that’s just my opinion.

Above all else this sickens me the most (aside from the crimes). As I watch ESPN coddle this story, retracting it’s claws and giving Paterno every benefit of the doubt reporting about his treatment and the Penn State treatment in a somber tone as if a legend had passed away I cannot help but become sick and angry.

ESPN was hellbent on burying the likes of Barry Bonds and Alex Rodriguez amidst their steroid scandals. Every day it was a visual witch hunt with scandalous headlines being plastered all over our screens and shoved down our throats.

ESPN, like many other media outlets, camped outside their homes and helped apply the stranglehold on the athletes of the steroid era. Forcing the likes of Alex Rodriguez, Andy Pettitte and others to hold press conferences to offer explanations.

But with Paterno there is the same volume of coverage (if not more) but it lacks the viciousness. And while you can make the case that A-Rod and Bonds were both the “criminals” in the matter, where Paterno is not, it still makes me angry.

At the end of the day players who took steroids ultimately hurt themselves more than anyone. They didn’t break an actual law by taking steroids and merely cheated a game.In comparison these incidents aren’t in the same stratosphere.

I know the big story is all about Paterno and while he is certainly at fault for his lack of action he is not the criminal. Yet, any casual viewer to ESPN may be under the impression that Paterno was the abuser. 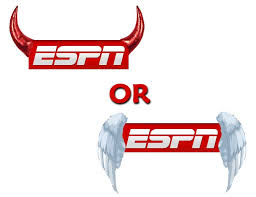 Where are your morals ESPN? Where is your integrity? You ignore Sandusky completely all for the sake of picking the big name here in Paterno. Spend an hour watching ESPN and 96% is Joe Paterno, 3% the timeline and 1% actually reporting about the disgusting acts of Sandusky.

They slanted a sex scandal story which is morally wrong on so many levels. It’s easier to digest when it’s coverage of a game or sporting event but when you slant a story of this magnitude I seriously question your company and image. Where do you get off?

It’s disgusting the way this station continues to carry itself. When it comes to reporting the sports news ESPN constantly fails. Even the big stories, like the Penn State sex scandal, ESPN takes it’s own slant (usually what is beneficial to them) and shoves it down your throat.

Aside from the games on ESPN and the select few personalities I do enjoy, ESPN is a pathetic excuse for a sports superstation.

They should feel right at home with all this sex scandal talk:

And that’s just 6 of many instances. So maybe we need to start asking ourselves who we go to for our sports information and who we allow our kids to tune in to.

Aside from all of this I will close with the following. My article may lead you to believe I feel a certain way. But allow me to clarify this; I know there is a process, a due diligence that is afforded to Paterno and Sandusky as well as Penn State that requires respect. It’s outlined in our legal system.

You nor I nor ESPN know how much or how little Paterno knew, what he did about it and to what extent. So for the present time we are all merely speculating and pondering.

But with that said shouldn’t the same process of due diligence should have been done in regards to the Penn State scandal? I believe so.

For those of you ready to raise the torches down at Penn State in defense of Joe Paterno keep in mind the stance you are taking. This is a very tricky matter. Imagine how these victims and their families feel, what they are going through and what they have endured and will endure.

In reality as tragic as you may feel about the departure of Joe Paterno, he was able to do what he loved for more than 50 years. He led a happy life filled with great success and accomplishments. At the end of the day the loss of his career and his legacy in a game of football pales in comparison to the scars and torment the victims will have to endure and live with for the rest of their lives.

Don't Let the Door Hit Ya on the Way Out

LSU vs. Alabama – The Game to Watch in College Football this Saturday