LSU vs. Alabama - The Game to Watch in College Football this Saturday
Advertisement There are many rivalries that stand the test of time. Boston Red Sox/New York Yankees Duke/North Carolina and LSU/Alabama. All week the talk has been about this being the true championship game in college football.

But as the #1 and #2 teams get ready to square off in tonight’s pivotal game let’s take an in-depth look at this matchup that is promising to be the game of the year in College Football. So take a look at who has the edge in each key matchup

The Tigers have seniors Jarrett Lee and Jordan Jefferson running the show and also have a more diverse offense than Alabama’s. Sophomore A.J. McCarron is making his ninth game start and it has never faced an environment anywhere near to the one he will see tonight.

LSU has good backs, but Trent Richardson is the best player around the area and a menace with a true ability to score from any distance. Backup Eddie Lacy has as many yards rushing as LSU’s leader, Spencer Ware, but Lacy is returning from a nagging turf toe injury. Alabama has the best run defense within the nation.

Rueben Randle continues to be the Tigers’ playmaker and it is tied for that SEC lead in receiving touchdowns with seven. Tight end Deangelo Peterson’s receiving abilities lead him to a difficult game for Alabama’s linebackers and safeties. 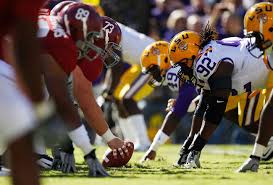 LSU is fully healthy for the very first time in five games. Getting pads T-Bob Hebert and Will Blackwell back at their natural positions is vital and they are also boosted by P.J. Lonergan’s return from an ankle injury.  Alabama’s line has some depth issues, however the Tide still leads the SEC in rushing attacks at 229.2 yards per game.

The LSU Tigers have a bit more complex of a defensive front scheme and call for their players to do a bit more in comparison to the Tide’s 3-4 D. Bama’s linemen mainly attempt to occupy blockers to allow the 4 linebackers to move freely.

Dont’a Hightower and Courtney Upshaw are perhaps the very best tandem in the united states with speed and power in their 260-pound frames.  LSU’s Ryan Baker and Kevin Minter are more compact. Minter might find more action than normal as LSU most likely will remain in its base 4-3 defense a lot more than normal.

Both teams have great cover corners and difficult-striking safeties. Bama cornerback Dre Kirkpatrick is a great game on Randle, but LSU cornerback Mo Claiborne is equally as good. And there is always the “Honey Badger,” Tyrann Mathieu, possibly the very best defensive playmaker around the area. Mark Barron and Robert Lester are larger than LSU’s safeties, Brandon Taylor and Eric Reid, however the Tigers’ tandem has got the edge in speed.

I'm Just Not Buying It

Give an Idiot a Platform and….