Alex "My Heart's Just Not In It" Ovechkin
Advertisement 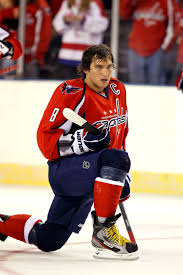 Alex Ovechkin was recently suspended three games for his hit on  Pittsburgh’s Zbynek Michalek during Sunday’s Capitals-Penguins game and has forfeited $154,677.75 to the Players’ Emergency Assistance Fund and miss Washington’s game on Tuesday against Boston, Jan. 31 against Tampa Bay and Feb. 1 against Florida.

Now, this three game suspension has everyone at the Washington Capitals’ organization grumbling. So what did team owner Ted  Leonsis have to say about it? Well, luckily for all of us Ted made a statement on his personal blog page: ““I do not agree in any way with the suspension of Alex Ovechkin for 3 games. I support Alex Ovechkin. He is our bedrock player – our Captain; and he and his family know that we are always here to support him.” Then the GM, George McPhee, to reporters: “I was surprised and disappointed. I didn’t anticipate he’d be suspended for three games. We presented our case to the league yesterday and I thought we did real well, but didn’t get the result we wanted.”

GM McPhee made the official announcement after the team’s practice this morning to say that Ovechkin will not participate in this year’s All-Star Game in Ottawa saying he doesn’t want Ovechkin to be a distraction. “His heart’s not in it,” McPhee tells Stephen Whyno of The Washington Times. McPhee also said that Ovechkin approached him saying that he was a suspended player and that he does not deserve to be at the All-Star Game. Ovechkin’s reasons for stepping aside from the game seem noble, but it’s an easy situation to be skeptical about.

As for Ovechkin himself, this is what he had to say: ”My heart is not there. I got suspended, so why I have to go there?” Seriously…Ovechkin! Your heart finally got into the season at almost the midway point and you have been chosen to be an All-Star participant and now you are pouting over a suspension so you opt out of the All-Star game. Yeah, you are a star Ovechkin, just another drama queen in the NHL. Your heart is probably at your new million dollar home with your tennis queen. But the game will go on without Ovi!

With Ovechkin out of the game, that opens up another roster spot for someone else deserving to go. The leading candidate to replace Ovechkin now that Scott Hartnell has been added to the game would be Penguins forward James Neal. Neal is near the top of the NHL leaderboard in goals with 26, the same number his All-Star teammate Evgeni Malkin has.

Today's Burning Question From the NHL