It’s the final stage before the big stage. One of the most exciting rounds in sports playoffs. Championship weekend in the NFL. It all kicks off later today at 3pm when the Baltimore Ravens head to New England to play the Patriots. Then we get another dose of Championship action when we kick it “old school” in the NFC with a matchup between the New York Giants and the San Francisco 49ers. They kickoff at 6:30pm

So who is going to still be standing when the smoke clears? I have been faring pretty well in predicting the outcomes of this year’s playoff games posting a 5-3 record. Let’s see how this shapes up. I am a bit sad my original Super Bowl pick Houston Texans aren’t playing this weekend, but hey it’s my 30th birthday and nothing can top Championship Day for a birthday gift. God, I love this game. 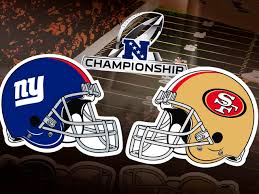 This is perhaps the toughest game to pick out of the two Championship games today. Simply because in my estimation whomever comes out of this game eventually wins the Super Bowl. It’s tough not to like either team. Both, in reality, weren’t picked to make it this far, not even close.

The New York Giants were decimated by injuries in the beginning of the season, mainly to their secondary. But somehow, Tom Coughlin constructed another late season push that brought the Giants to one game away from the Super Bowl. If they do make it, they will be the worst team (record wise) to make it to the big dance.

The San Francisco 49ers are proving why coaching is so vital in the NFL. Their turnaround is equally impressive considering they have almost the same exact roster as they did last season, the only change is at the head coaching helm.

Regardless of who comes out of this game alive, both of these teams look the most Super Bowl ready to me.

The Giants’ Eli Manning is proving to be one of the more elite playoff quarterbacks in recent years. You can’t even argue how good this man is. The Giants have played very well on both sides of the ball and if they can dictate the clock by dominating time of possession, the Niners may be in for a long day.

While many have picked the Giants, I just cant conceive it in my mind. The 49ers just seem more balanced and with their defense (although ranked lower in the playoffs than the Giants) it’s hard for me to believe that Giants will have success passing and running the ball. More importantly when it comes to controlling the clock, I just have more faith in the 49ers chances. Controlling the clock controls the pace of the game and in this matchup it should make the difference. 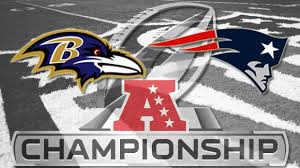 This game will be a bit easier for me to pick. The Baltimore Ravens head up to cold and snowy New England to play the Patriots. The weird thing about this game is I’m not convinced that either of these teams are better than either the Giants or the 49ers. I don’t mean to take anything away from the Ravens or the Pats, but frankly neither team isn’t very impressive.

The Ravens survived the Houston Texans, plain and simple. For a team that boasts a stout defense they got manhandled by Arian Foster and the Texans’ offensive line. Especially when you consider how the Texans gameplan had little to do with leaving the outcome up to rookie quarterback Tj Yates.

Despite multiple turnovers the Ravens still only barely squeaked out a win against the Texans.

On the other side the Pats manhandled the Denver Broncos who were riding an improbable wave of potency that is rarely seen. But for Pats fans that want to look at the final score of the drubbing laid down upon poor Tebow and the Steeds as some sort of proclamation of things to come, take off the blinders.

I can say the same thing to Ravens fans who think barely beating a Texans team without it’s best defensive player and a solid starting quarterback is a display of their dominance.

Therefore, ladies and gentleman I have dubbed this game the “Circumstance Bowl”. Both teams are here as a matter of circumstance. The Ravens are just lucky they didn’t have anyone other than Tj Yates to have to get through and could barely manage doing that. The Pats are just lucky Tim Tebow got to New England instead of a team that didn’t have to rely on a gimmick offense to find success.

So it all comes down to this. Tom Brady.

A motivated, angry and determined Brady playing at home doesn’t bode well for anyone. A banged up and hobbling Ed Reed doesn’t either.

Breaking Down the Showdowns – Who Will Prevail When the Smoke Clears