The woes of being a Chicago Cubs fan.
Advertisement

I moved to a northern city in Tennessee from Chicago when i was five. I don’t remember much, but what did stick with me was my Chicago teams. That includes the Chicago Cubs. For me being freshly twenty-one, it has been a long journey for the Cubs, as well as being a Cubs fan. With the obvious gap between winning seasons and lost seasons, numbers favoring the losses more, each year starts with a hope and ends with a shrug and common phrase of “We will get it next year.”

My personal opinion is almost irrelevant considering  no matter how much i complain, i will always be a Chicago Cubs fan. As much as they lose, I still defend them as if they had won the Championship the previous year.

I would like to believe that most Chicago Cubs fans have the same system as i do, when it comes to defending our team. As fans, we converse with one another on, to be frank, how bad the Cubs suck. However, as soon as a fan of another team says an inappropriate comment about our Cubs, we are quick to defend, as well as accept, the terms of what is of the Chicago Cubs. 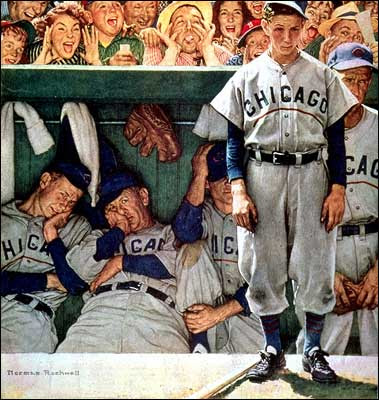 Personally, the Cubs could lose for another one-hundred years, and i would still be a fan. However, as a fan, i wish them luck, growth, and ever-lasting drive to do what most do not believe will be done. A win is a win when your a Cubs fan. It is a special day. A loss is another day, typical Tuesday, as i say.