Most of you reading this may be surprised that our Games of Fame section has yet to include a Mortal Kombat game. Well, you’re going to be even more surprised when you see our first Mortal Kombat inclusion isn’t the traditional “tournament-style fighting” format that the MK series has built it’s legendary status with. 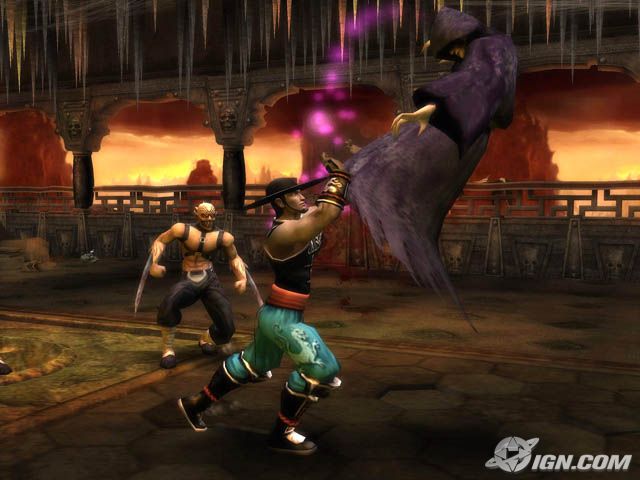 In fact this inclusion goes for Mortal Kombat’s 2005 release “Mortal Kombat: Shaolin Monks” which was the games venture into campaign-beat’em up style gaming. While traditional MK fans may have hated this temporary transition for MK, I absolutely loved the daring change and was kind of sad when it wasn’t offered in another installment after 2005. In October 2004, the president of Midway, David F. Zucker, called the release of Shaolin Monks the “first step toward delivering something that Mortal Kombat fans have been calling for: a new game set in the Mortal Kombat universe every year.”

The games storyline focused on events after the original Mortal Kombat event in which you can control one of two (or both in co-op) members of the Shaolin Order, either Liu Kang or Kung Lao. The story follows them as they travel through the realms in an effort to thwart Shang Tsung’s efforts to dominate EarthRealm.

The game features a multi-directional combat system that provides players an ability to attack any of the enemies that surround them fluidly and all at once in certain instances using the combo attacks feature. Players can also use their combos after launching an enemy into the air through a powerful attack or a throw.

The main characters also have many of their signature moves. Combos and special moves are upgradeable through the earning of experience points. There is also something really cool called the Fatality meter that goes up when more combos are executed on enemies. Once that meter has reached a certain level, a Fatality may be performed.

The main characters have the ability to perform multiple variations of Fatality moves including Multalities, which are Fatalities performed on multiple enemies at once.

It was a successful venture for Mortal Kombat, which at the time had seemingly become stale from the limited expansion the series could make in the tournament-style fighting realm. The game didn’t seem fresh to many longtime fans and gamers and this was surely an effort to provide that feel.

We jut find it unfortunate that there have been no spinoffs of this game, particularly with the onus that both Xbox, Playstation and Wii have placed on online gaming.

Maybe one day, we can see that spinoff come to life.

Until then, check out the game!