Under a Cloud, British Dominance of Tour De France Continues

Borderlands the Pre Sequel: Off to the Moon

After operating on a limited budget the Gearbox company that developed Borderlands found surprising success as gamers all around the world flocked to the stores to purchase what can easily be considered one of the best games of the year.

The popularity of Borderlands provided Gearbox with a much larger budget to work with and now we are a mere few days away from the release of Borderlands 2 which will hit stores in the US on September 18, 2012. 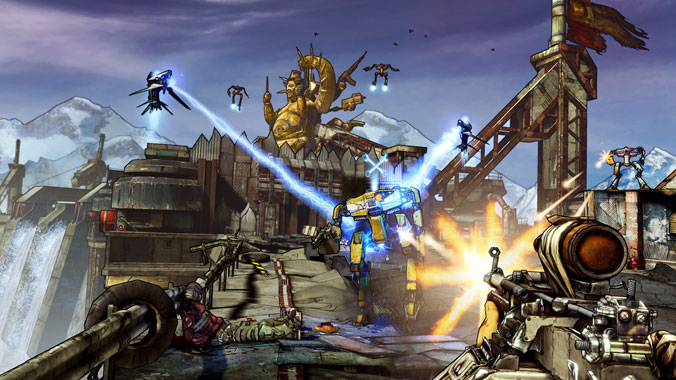 Borderlands 2 is the story of a group of treasure hunters of separate classes/styles hungry for fame and fortune on the post-apocolyptic planet called Pandora. The main villain is a fella by the name of Handsome Jack, who is a mainstay from the first installment, Handsome Jack has established himself as the leader of an evil corporation, Hyperion . The goals of Handsome Jack and Hyperion is to completely industrialize the entire planet of Pandora thus completely eradicating any and all colonial settlers.

So we have the cool storyline in place? Check. So what else can we expect.

Similar to the first game, Borderlands 2 will be armed to the teeth with character upgrades, even more than the original. Each upgrade will be taylored towards each individual character’s particular style of play. And there is a nice new/updated set of characters to choose to play from.

I’ll provide some information on these character breakdown’s courtesy of GamerInformer.com who composed a very detailed article breaking down all the things any Borderland-fan would need to know about the game:
—————————–

Taking over Roland’s class from the first game, the soldier Axton inherits the Scorpio turret as his special ability. Depending on whether you choose the Guerrilla, Gunpowder, or Survival skill trees, you can alter it in numerous ways. You can add extra guns to the turret, allow it to be teleported rather than thrown, and enable it to stick to walls and ceilings. If you’re looking for even more firepower, you can eventually gain access to a second turret that can be deployed along with the first. We expect Axton to be an extremely helpful component for teams, as his versatile turret(s) distract enemies and simultaneously damage them.

While Axton’s ability is similar to Roland’s from the first game, Maya’s is considerably different than Lilith’s. Whereas the latter darted around Pandora with her Phasewalk ability, Maya’s skill is called Phaselock. On its own, this ability locks enemies in a floating bubble that prevents them from attacking. If you’re looking to make it a more useful tool, you’ll want to travel down the Harmony, Motion, and Cataclysm skill trees. By spending skill points on the ability, you can eventually make it pull enemies towards you, explode upon expiration, slam foes to the ground, or cause them to change allegiance and fight for you. We can just imagine how much trouble an enemy will be in if they’re Phaselocked while one (or two) of Axton’s turrets are currently on the battlefield.

Our September 2011 cover boy isn’t one for subtlety. His Gunzerker special ability allows him to dual wield any weapons in his inventory and go into a rage that would make Rambo blush. If you feel like getting especially uncouth with the scum of Pandora, you can invest in the “Come at me, Bro!” skill. Once he’s equipped with it, he begins his rampage by flipping his enemies dual middle-fingers, sending them into a rage. Their anger won’t get them far, however, as Salvadore will have full health and boosted defenses while this ability is running. If you want to cause even more carnage, you can increase the ability’s duration, reduce its cooldown, or allow it to be used while you’re downed. This class won’t be for fans of sniping or cautious defense, as the large majority of his upgrades focus on pure firepower.

Considering Zer0 is a sweet robot ninja assassin, we’re expecting to see plenty of Borderlands fans picking him right out of the gate. Luckily, he’s got plenty of substance to back up his bad-ass look. His Deception skill allows him to disappear, leaving enemies distracted by a hologram. While they’re wasting their time going after his doppleganger, Zer0 can resurface in an ideal sniping spot or move in close for some deadly melee attacks. Upgrades allow his decoy to explode when it expires, grant extra melee damage for some up-close stealthy kills, or increase the odds of a critical hit when attacking from the sides or back. With his mix of long-range accuracy and deadly melee attacks, this assassin is one of the most unique Borderlands classes we’ve seen.

The game will also offer a Season Pass with tons of downloadable content and additional downloadable characters. The Season Pass proved very successful for Mortal Kombat’s last installment so I see no reason to doubt the success of this one. In fact, sign me up!

It’s worth mentioning that the Vault Class will also be included in the game. They won’t be playable but they will be a bigger part of the game this time around.

And those who are fans of the lovable Claptrap will see a slightly different Claptrap this time around. It seems this lovable little character views himself as a hero this time around and will be more instructive and play the “director” role in this game. Don’t fret, Claptrap is back with a chip on his shoulder.

One of the great things about the original was the upgrades in classes for each character and of course the weapons. But Gearbox took it to the next level in this game with enough upgrades to wet any game-addicts pallet. They even added some more character specific customizations that were not available in the first game.

With a revamped game, a bigger budget this time around and a devoted fan base Borderlands 2 is primed to be named Game of the Year. I have no reason to believe that it will fall short of expectations. Most game sequels fall into the trap of trying to reinvent the wheel in terms of the foundation of their game. More often than not it leaves fans pissed off and highly critical.

But the folks at Gearbox just improved on the original formula. They kept pretty much everything in tact, but made improvements while adding  enough brand new juicy features to keep the game fresh.