Game of Fame: The Warriors
Advertisement

Some people consider the 1979 film by Walter Hall, The Warriors, based on the same-titled book by Sol Yurick in 1965 a cult-classic. Quite frankly, I thought the movie was boring at best. But in 2005, Rockstar Games released the video game version of the popular movie. The game was in typical “Rockstar Games” fashion, an action-adventure- survival game with a heavy focus on brawling and free moving throughout stages and environments. Other elements are mixed into the gameplay experience, such as the use spray paint to mark your turf and the ability to insult other people. 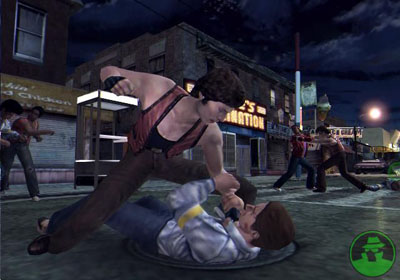 Released on both Xbox and Playstation, the game featured a rumble-style gang action theme. The player(s) could be assisted in brawls by up to 8 Warrior gang members adding a unique element that made the Warriors a fun game to play, especially on multi-player. The game also loosely followed the tone of the 1979 film, with famous scenes re-illustrated through the games’ storyline.

Players would also have the ability to play as all the Warriors throughout the game. Choosing the option to play the game in Multi-Player offered the same storyline, abilities and action as playing the game in single-player mode. But people complained the multi-player mode screen splits vertically for two players, creating a narrow field of vision, that cluttered screens.

Despite the complaints, the game received mostly positive reviews as many considered the game to breathe life back in the brawler genre and people also commended the games overall feel, tone and the music.

Although the game received great feedback overall, Rockstar has not developed an additional game into the series. While that may be difficult to do considering how to first game played out and also considering the 1979 film had a rather definitive end to the story, it’s not to say that Rockstar couldn’t find a way to keep the series going. They’ve done it before with games like Red Dead Revolver and seem to release a Grand Theft Auto every few years.

What’s even more interesting is that Xbox has not updated the game to be playable on the 360 console which it has done for various popular game titles. They did however, release a Warriors game in the arcade a few years back to commemorate the 30th anniversary of the film, but was a classic side-scrolling, beat’em up styled game that lacked many of the features that made the original such a smash hit.

I would personally love to see this game reintroduced. If not through a new edition to the series, which is preferable, then through updating the game so it is available to the newer consoles. One can hope.

I spent a considerable amount of time tackling this game and played almost entirely with a friend on the multi-player mode. It still ranks as one of the most fun I have had playing a video game. Therefore is easily makes our Games of Fame list at The Deviant Gamer.