With around 28 games left in the regular season, there is no team in the NHL playing at a higher level than the Washington Capitals. Since a 4-3 loss to the New York Islanders on December 27th, Washington has gone 19-2-2. The Capitals have vaulted into first place in the NHL over the last 23 games. They currently have 84 points and a record of 39-11-6. They even went on a 14 game point streak during this stretch 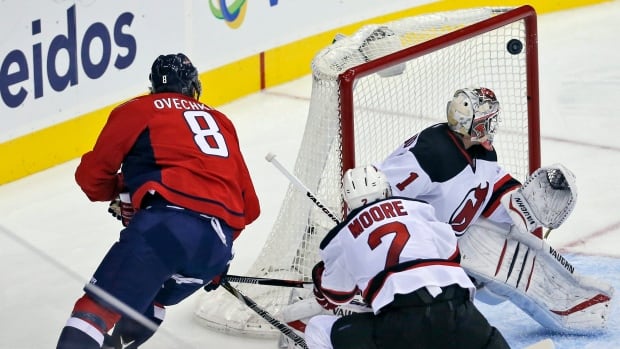 Washington Capitals Winger Alex Ovechkin scores a goal against New Jersey. Ovechkin has helped lead the Capitals to the top of the NHL this season. (Source cbc.ca)

Over the last 23 games, the Capitals have been remarkable at both ends of the ice. Since this stretch began they have scored 102 goals for an average of 4.43 per game. Meanwhile they have only given up 47 for an average of 2.04 per game. Washington has now scored 191 goals and only allowed 117, giving them the largest differential in the league at plus-74. They are second in goals scored averaging 3.41 per contest and are first in goals against with an average of 2.09 per contest. They also rank in the top six in both power play and penalty kill.

The thing about this Washington team compared to those over the past few years is that anyone can contribute at any time, during any game. Nicklas Backstrom leads the team with 60 points. Alex Ovechkin leads the team in goals with 26. TJ Oshie, Evgeni Kuznetsov, and Marcus Johansson all have at least 12 goals and 40 points. Not far behind them are Justin Williams, Andre Burakovsky, Jay Beagle, Brett Connolly and Lars Eller who all have at least 10 goals this season. However, it is not just up front where they have the scoring depth. Washington is one of two teams in the NHL with three defenseman with at least 25 points. Matt Niskanen, John Carlson and Dimitri Orlov have 32, 28, and 26 respectively. Actually, all of the top six Washington defenseman have at least 10 points this season.

Having two goalies playing so well, with such a potent offense has Washington sitting exactly where they want to be. The thing about this years team so far is that they are at almost exactly the same pace at the team from last year. Through 54 games last season the Capitals were 42-10-4 with 88 points leading the league. While last year was scene as one of the best regular seasons in NHL history, this year is heading in the same direction. If Washington keeps winning games at the pace they are on they might even break last years total and even the franchise record for points in a season.

While the regular season has once again been great for the Capitals so far, the real test will come during the playoffs. The Capitals have not made the Conference Finals since the 1997-1998 season despite all of their regular season success. Last year they relaxed during the last part of the regular season and it hurt them during the playoffs. Getting knocked out in the second round once again was not something they took lightly coming into this year. It won’t be a surprise if Washington is playing in June this year if they keep playing like at this level because when they do, they might be unbeatable.

My Name is Zach Fischer, I am from Long Valley, NJ. Currently I am a sophomore at Temple University in Philadelphia studying Communications with a concentration in Media Studies and Production. I have edited and produced some of my own videos and will be doing more in the future. Sports have always been my passion especially hockey. I've played hockey since I was five years old and have been skating since I was 3. Whether its college hockey, college football, the NHL or NFL you will always find me keeping up to date on everything going on in the sports world, and watching as many games as I can. Being involved in sports is something I believe will always be part of my life and I hope to be able to be involved with my career once I graduate from school.