When the Chicago Cubs at last won the World Series this past fall, it laid to rest the last infamous curse in Major League Baseball, the Billy Goat. It came 12 years after the Boston Red Sox ended their own equally well-known hex, that of Babe Ruth. When added together, the curses of the Bambino and the Billy Goat lasted an astronomical 194 years. Now that both are over, the question has to be asked: what curse-busting team was better, the 2016 Chicago Cubs or the 2004 Boston Red Sox?

Both teams were built by innovative and daring GM Theo Epstein and were pretty stacked, that’s tough to deny. Both bounced back from crushing LCS losses the year prior to win it all. And both had to overcome what were thought to be insurmountable odds to achieve their destiny. Here’s an in-depth look at both teams, with statistics provided by the MLB app. The Cubs are the more recent of the pair, so we’ll begin with them.

Pitching: Pitchers are a large reason behind any World Champion MLB team, and last year’s Cubs were no different. Anchored by the veteran grit of stalwarts John Lackey and Jon Lester (who won it all with the Red Sox as well in 2013), this dynamite rotation also featured young studs Jake Arrieta and Kyle Hendricks. Lester and Hendricks were the second and third runners-up respectively to Max Scherzer for the 2016 NL Cy Young Award, which should automatically tell you something. Arrieta’s 2016 season was not as good as his 2015 campaign that won him the aforementioned crown, but it was still a dominant one nonetheless that helped the Cubs win their first NL Central title since 2008. Jason Hammel rounded out the starting five, and while he was not on the same level as the other four, he made for a solid fifth starter. The team’s bullpen was also very tough. Starting the season with Hector Rondon as closer, midseason trades brought the team Mike Montgomery and Alrodis Chapman. Though Manager Joe Maddon’s overuse of Chapman almost cost Chicago the Series in Game 7, the rest of pen was able to lock it down, and Montgomery’s first career save later that game won the team its first Commissioner’s Trophy in 108 years. The Cubs as a whole in 2016 pitched to a 3.15 ERA, a 1.11 WHIP and a .212 BAA, all three led the majors.

Lineup: Also infused with a great combination of youth and experience, Chicago’s offensive throughout last year was led by eventual MVP Kris Bryant and franchise cornerstone Anthony Rizzo. Ben Zobrist, Addison Russell and Dexter Fowler made sure that the burden on the two men’s shoulders was never too great, while Jason Heyward’s outfield defense was marvelous as always. David Ross and Miguel Montero made for a solid tandem behind the plate, a large reason for the success of the team’s hurlers. Kyle Schwarber tore his ACL and MCL less than a week into the season and, incredibly, returned in time for the World Series, thriving as designated hitter when Cleveland was the host. 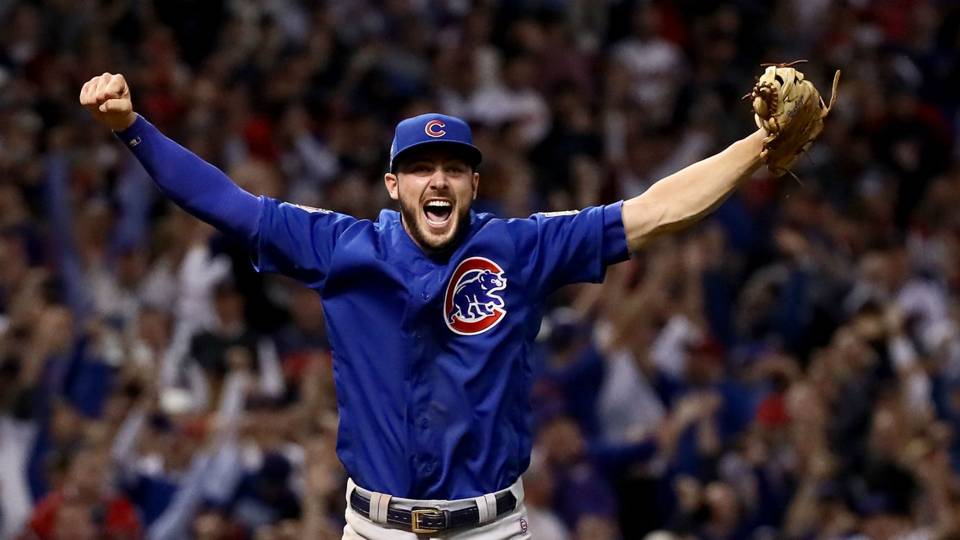 Courtesy of The Sporting News.

Chicago’s team batting average in 2016 was a deceptive .256, which doesn’t exactly seem deadly, but their 199 home runs and 767 RBI certainly were.

Postseason: After tearing through the 2016 regular season and winning 100+ games, the Cubs faced the NL Wild Card Champion San Francisco Giants in the NLDS and won 3-1. They met another NL West team in the NLCS, Los Angeles. Unlike the previous season when they were steamrolled by the Mets, Chicago manhandled the Dodgers and when the Cubs took Game 5, the team won its first NL Pennant since 1945. Their opposition was another historically unfortunate team; the Cleveland Indians.

The Cubbies and the Tribe traded wins in the Series’ first two games, but Cleveland took Games 3 and 4 for a commanding 3-1 lead. All hope seemed to be lost for the Cubs and their tortured fans, but with its back against the wall, Chicago won Games 5 and 6 to force the winner-take-all. Game 7 of the 2016 World Series was an instant classic and one of the best MLB games of all time. Though the Indians rallied late on a dramatic Rajai Davis homer, Series MVP Ben Zobrist gave the Cubs the lead back in the 10th, and Mike Montgomery sealed the deal by forcing Michael Martinez to ground out to Kris Bryant. 108 years of futility was over and Cubs fans around the world rejoiced.

Pitching: After Boston’s heartbreaking loss to the Yankees in the 2003 ALCS, the team traded for stalwart Curt Schilling to bulk up their rotation. Putting another ace next to long-time anchor Pedro Martinez gave the Red Sox an instantly legitimate rotation. But things didn’t immediately go according to plan. Schilling lived up to his billing, but Pedro struggled uncharacteristically for much of the season. It wasn’t until the team made a blockbuster mid-season trade that Martinez found his bearings, but he pitched like the three-time Cy Young winner after that. Derek Lowe, Knuckleballer Tim Wakefield and Bronson Arroyo rounded out the staff and helped the team win the AL Wild Card after just falling short of the Yankees in the divisional race. Courtesy of the Baseball Hall of Fame.

The team’s bullpen was also bolstered in the offseason by the signing of closer Keith Foulke. The lack of a true closer is considered by many as the reason that Grady Little didn’t pull Martinez in 2003’s Game 7, leading to Aaron Boone’s now-legendary walk-off homer. But Foulke’s addition assured that this would never be the case again. Mike Timlin and Alan Embree served as setup men and helped lock down late leads while Scott Williamson and Ramiro Mendoza also had large roles. The Red Sox pitched to a 4.18 ERA that season, largely thanks to their summer struggles where the team hovered precariously close to .500.

Lineup: The dynamic duo of David Ortiz and Manny Ramirez (who combined for 84 home runs) led the team, with Kevin Millar, Bill Mueller, Johnny Damon and Jason Varitek providing depth. Defense was a major problem for the team in the middle months of the season, which led to a trade at the deadline that shook the MLB. Boston traded franchise cornerstone Nomar Garciaparra to the Chicago Cubs in a three team deal, receiving Doug Mientkiewicz and Orlando Cabrera in return. Though Red Sox fans were devastated to see Nomar leave, the move stabilized the team’s defense and brought its pitching back to life, leading to second-half surge that ended in Boston’s second straight winning of the AL Wild Card.  Boston’s persistent offense lead the majors with a .282 AVG, 912 RBI and 949 total runs, among numerous others.

Postseason: The Red Sox steamrolled the Anaheim Angels 3-0 in the ALDS, setting up an ALCS rematch with the Yankees. To the surprise of everyone, the Yankees dominated the first three games convincingly and held a 3-0 advantage as Game 4 commenced, seeming like the suffering was destined to continue. But, thanks in large part to Ortiz, Boston made history and stunned their rival, winning Games 4, 5 and 6 to force a Game 7, something that had never happened in the MLB when a team had a 3-0 lead. Boston won Game 7 in dominant fashion, exorcising the demons of New York.

The Red Sox made easy work of the St. Louis Cardinals, another storied rival, in the Fall Classic. Despite having the better regular season record by seven games, the Cardinals foundered against Boston and never led in the Series at any point of any game. Foulke finished off an impressive sweep by forcing Edgar Renteria to ground out in the bottom of the 9th of Game 4, making the Red Sox champions for the first time in 86 years.

Is there any way to answer that question? I don’t think there is. Admittedly, I am a Red Sox fan, so of course I’m inclined to say Boston, just as a Cubs fan would say Chicago. You can look at the pitching excellence of the ’16 Cubs or the batting dominance of the ’04 Red Sox, but either way you’ll have a tough time making your decision.

One thing is certain, both teams made MLB history.

What team do you think was better? Think long and hard and then let me know on Twitter at @Flat_Manigen74.

Chaos In Queens; Mets On The Brink Of Imploding