A Heated Rivalry...Just Got Hotter
Advertisement 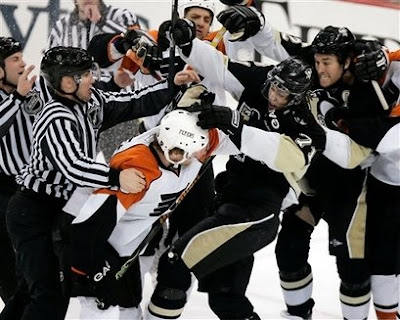 The NHL season is right around the corner and it’s time to get back on the ice and start looking at what is buzzing around the league. We take the time to recognize the loss of life we have witnessed this summer throughout the NHL and KHL and realize how precious the players really are to the sport.  What else makes the sport? Renewed Rivalries come to my mind and during the off-season one rivalry got deeper and more heated! Which one? The Flyers, Penguins rivalry has more sparks to it going into the season! Shall we go in-depth and see why? I think so!

This off-season brought two players across the river and into the Philadelphia camp. Max Talbot and Jaromir Jagr gave Pittsburgh the biggest slap in the face when they both decided to continue their careers in the City of Brotherly Love, Philadelphia. Along with these two players’ moves, Sidney Crosby plays a factor in this rivalry whether anyone wants to admit it or not; he definitely brings the anger out in Philadelphia. But let’s follow Max Talbot’s look into why he chose the Flyers.

Maxime Talbot was one of the more underrated players on the Pittsburgh Penguins the last few seasons. Always a grind line-type player and not a guy to score a ton of goals, Talbot was the sort of player that could get lost in the mix. In Pittsburgh, it’s easy to go unnoticed when you’re playing alongside the likes of Sidney Crosby, Evgeni Malkin, and Jordan Staal. Then again, Talbot was the most important player for the Penguins when they clinched Game 7 of the 2009 Stanley Cup finals scoring the Penguins only two goals against Detroit and giving the Pens the Cup.

Now, that alone makes Talbot’s free agency departure to Philadelphia all the more difficult for Penguins fans to wrap their heads around. Not only did Talbot end up leaving Pittsburgh, he took his irascible talent just across the state. With the Penguins and Flyers already being bitter rivals, you’d think that Talbot deciding to go to a hated team would make it a hard decision.

Here is what Talbot has to say about his move:

“The first step for me this summer was to realize that I was not going to be back with the Pens,” he said. “That was obviously tough. It was a hard thing, because I had been there six good years. But when that was set aside, I wanted to make the best decision for Max Talbot — the best organization that gave me the chance to win, an organization that treats its players well and takes pride in winning and doing the right things.” That made signing with the Flyers an easy decision for Talbot.

“You know one, two players on every single team in the League,” he said. “You hear about the way ownership and the organization takes care of their players. Let’s say there’s 10 top teams (in the top third), 10 middle teams … the Flyers always come up in the first third. It’s their reputation and I think it’s well-deserved. Since I signed here, I know camp hasn’t started, but I can see the professionalism of the ownership. You feel like you’re in good hands. It would have been tough for me to move from Pittsburgh to a team that you have to build a lot more.”

When these teams collide there’s always a little extra heat between the two. This season proves to have things run a lot hotter with Talbot’s defection as well as former Penguins legend Jaromir Jagr spurning an offer from Pittsburgh to sign with Philadelphia.

What Talbot brings to the Flyers is a guy who plays the game with a sandpaper-like nature, consistently rubbing the other team the wrong way with his aggressive style. He also gives them a stable presence on the penalty kill and a guy with enough of a scoring touch to be a threat if given the opportunity. He’ll also figure to be a scene stealer once again on HBO’s 24/7 leading up to this year’s Winter Classic.

Now, the Flyers fans have every reason to be excited about putting one over on the Penguins in the offseason, the reception for both Talbot and Jagr doesn’t figure to be very welcoming when the two teams meet up for the first time in Pittsburgh on December 29. If Talbot can do for the Flyers what he did in Pittsburgh, the fans on Broad Street might have a reason to throw a parade next summer.