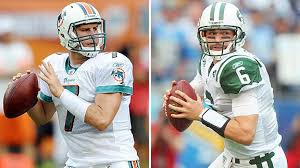 As if the Miami Dolphins/New York Jets rivalry needed any more fuel added to the fire, Miami’s Jason Taylor had some rather interesting remarks regarding his former teammate in New York.

“We need to grow and we need to continue to change, and I think Chad has grown immensely since I left here a year ago,” Taylor said in an interview with the local NBC affiliate. “I saw a kid in New York, Mark Sanchez, that is young, I don’t think he’s as talented as Chad Henne.”

The Chad Henne/Mark Sanchez comparison has been going on since they both entered the league.

While Henne’s career numbers are better than Sanchez, Sanchez has led his team to the AFC Championship game and has a great playoff record.

But it can be argued that Henne has less talent around him, has had to start from scratch with a rebuilding team and has had to endure coaching and offensive system changes. Mark Sanchez cannot say the same thing.

Who do you think is the better QB?

Lorenzo Alexander: A Force on and Off the Field