Break Up of Yankees' No Runs DMC?
Advertisement

“No Runs DMC” – Not quite the same as the original Run DMC hip-hop group formed by Joseph Simmons, Darryl McDaniels, and Jam Master Jay.  The New York Yankees have formed their own electric group which has since been dubbed “No Runs DMC”.  Dellin Betances, Andrew Miller and Aroldis Chapman (first letter of first name of Dellin Betances, first letters of the last names of Miller and Chapman) form the backbone of the formidable Yankees bullpen.  The trio is both literally and figuratively imposing, with Bentances standing 6 feet 8 inches tall, Miller comes in at 6’7 and Chapman is the smallest of the bunch at a “small” 6’4.

But besides their presence on the field, the relievers throw among the hardest fastballs in baseball and wield devastating sliders and breaking balls. Aroldis Chapman is well known throughout baseball as the hardest thrower possibly ever, touching 104 MPH while averaging a mere 100 MPH.  His slider averages 87.2 MPH while his changeup hovers near 87.9 MPH according to FanGraph’s Pitch FX.  The average spread between his fastball and slider of over 12 MPH is absolutely devastating to a hitter; having to prepare mentally and physically to hit a 100+ MPH fastball and seeing an 88 MPH slider breaking into your hands does damage to a hitter as seen in Chapman’s success as a closer.  Andrew Miller, the Yankees 8th inning set-up man, doesn’t throw the flames that the aforementioned southpaw does, but Miller’s left handed approach is extremely effective too.  Miller averages between 94-95 MPH on his fastball, which is nothing to scoff at, while his incredible slider sits around 83 MPH according to FanGraph.  That spread of 11-12 MPH is just as devastating as Chapman’s, and Miller has learned to perfect his craft.  The reliever has seen revitalized success in the Yankees pen, using his slider’s impeccable break to confuse and embarrass hitters.  Lastly, the “middle” reliever who could be a closer on many teams right now, Dellin Betances throws a 97-98 MPH fastball on average that reaches over 100 MPH regularly. His breaking ball, which seems to be both classified as a slider and curve, sits around 84 MPH in 2016.  Once again, the spread of 13 MPH between his fastball and breaking ball is incredibly difficult for a hitter to adjust to, even from a righty like Betances.  There’s no doubt his 6’8 frame helps in deceiving hitters even more, as he is that much closer to the plate when he releases the ball from the mound. And when that very same 6’8 pitcher is throwing as hard as Betances is, there’s only so much the human eye can do to keep up.

Well, not necessarily. Miller is having an exceptional season so far, as noted by his pristine 1.37 ERA and .71 WHIP.  His trade value is at an all-time high at the mid-season point in 2016.  His fellow bullpen buddy Aroldis Chapman also comes high on the radar of teams in need of bullpen help.  The Yankees, sitting at an exactly .500 record of 44-44, are in the basement of their AL East division behind the Baltimore Orioles, Boston Red Sox and Toronto Blue Jays.  The Yankees best hitter is the 39 year old Carlos Beltran and with his injuries, he has missed some time in 2016.  2B Didi Gregorius has turned it on of late to help power a bit of offense in NY, but the Yankees overall have a problem putting runs across the plate. Without the presence of a real big hitter, the Yankees lineup has sputtered out in many games this year.  Is it time for the front office to deal 1/3 of their 3 headed bullpen beast, and receive in 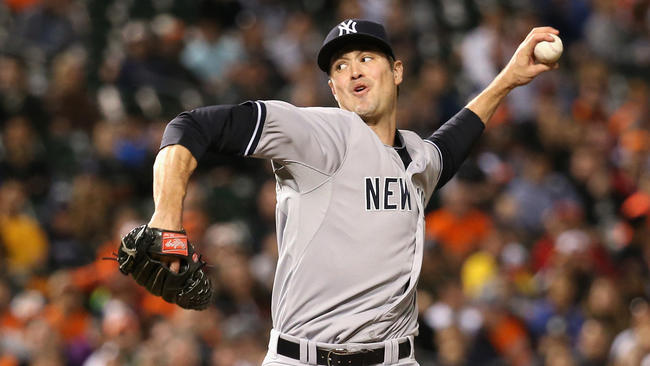 return a slugger to bolster the lineup?

If you had asked me that question before the first pitch of 2016, I would have said no.  I would’ve argued the offense would find its way through slumps as Alex Rodriguez, Mark Teixeira, Chase Headley and Brian McCann were all veterans at the plate. Young guys like Greg Bird and Starlin Castro would add fuel to the fire, and keeping an impenetrable bullpen would give the Yankees leverage for years to come.  But sitting in 4th place in the AL East at 44-44 at the All-Star break is disappointing.  Asking myself now, I have leaned significantly closer to trading someone like Andrew Miller to receive a hitter to bolster the lineup.  A-Rod is not the player he used to be, Tex is suffering through injuries, Greg Bird has been hurt all year, Headley isn’t producing and McCann has hot patches and cold streaks that don’t align with the rest of the lineup to produce runs.  The Yankees undeniably need offensive help, but is that need enough to break up “No Runs DMC”?

I am a 21 year old sports enthusiast who is currently studying Actuarial Mathematics and Finance at Bryant University in Smithfield, RI. I live in Milford, CT and have lived in NY or CT my whole life. I'm looking forward to bringing readers both new information and history that is either forgotton or overlooked! Feel free to follow me on twitter: @redheaddrohan