You have to give the front office of the Chicago White Sox credit. GM Rick Hahn and PBO Kenny Williams are pulling out all the stops with a number of huge trades to make the White Sox a force once again, something that hasn’t been the case for some time.

Although this is coming at the sake of the team’s present, South Side baseball fans should be quite pleased with the team’s commitment to being a contender again.

Every deal has bolstered the White Sox farm system with a number of big name youngsters. It all started with a bang back in December.

This trade took the MLB by storm. Though Sale had been a trade rumor for months by this point, the deal was still a shock because of the magnitude. Not a lot of people foresaw the lefty going to one of baseball’s biggest markets in exchange for two of the best prospects in the game.

Chicago said goodbye to its longtime ace, but gained two possible franchise cornerstones in return, five-tool infielder Yoan Moncada and flamethrower Michael Kopech. But that wasn’t the end of it. A day later, even more gas was poured on the hot stove.

Although this move was a head-scratcher on the Nationals’ behalf, it was gold for the ChiSox. Lucas Giolito’s value on the Pipeline has waned a bit recently, but no team will look a 23-year-old who sits at 95 MPH in the mouth.

Lopez, also 23, possesses a wicked curve to go with his heater. All this for the price of a light-hitting outfielder. I’m sorry Washington, but come on, what were you thinking?

That was it for the time being and it looked as if the team may have been done. But Hahn has picked it up again in the last week and a half.

After Chris Sale packed his bags for Boston, the Pale Hose’s next best pitcher was fellow lefty Jose Quintana, fresh off an All-Star 2016 season. Seeing more bait, the team sent their ace to the other side of the Crosstown Classic, the Cubs.

In return they received 20-year-old Eloy Jimenez, the 2013 international pool’s biggest name. While not a power hitter, the Dominican has great bat speed and has tore up Single A+ this year. Dylan Cease falls lower on the Pipleline, but sits anywhere from 94-98 MPH despite Tommy John surgery. Who wouldn’t love that in their farm?

Then, just Tuesday night, another blockbuster. 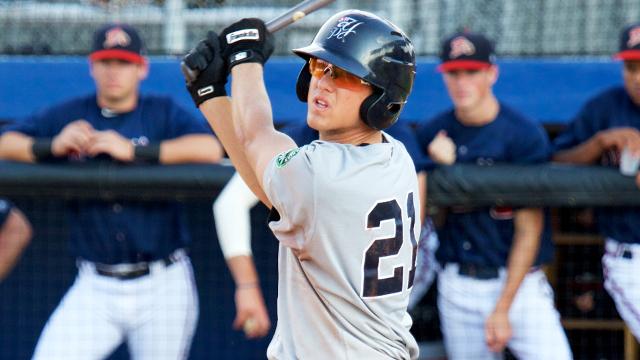 Blake Rutherford is now one of three young White Sox outfielders on the Pipeline. Photo by Minor League Baseball.

Adding 20-year-old Blake Rutherford to the farm gives the ChiSox another potent young bat. A lefty, Rutherford has made all the teams that overlooked him in the first round of the 2016 Draft look stupid. His smooth swing and smart eye make him an outfielder than can hit for both average and power. He will fit very nicely with Moncada and Jimenez.

It seems that the White Sox may be done after this move. The only players remaining on their roster that would be appealing to suitors are Jose Abreu and 2017 All-Star Avisial Garcia. There are always a couple players that are untouchable during a rebuild to keep some kind of foundation in place. With no rumors around either player, it appears that they are staying.

With all these blockbusters designed for the future, it’s safe to say the Pale Hose won’t be contending any time soon. But, when all the players they got in return are ready for the big leagues, the Chicago White Sox are going to be one scary team.

Pablo Sandoval Is Reportedly Reuniting With The San Francisco Giants