Every day a storyline pops up regarding the fast paced Free-Agency in the NFL. After the lockout, it’s been a very accelerated process. Exciting and something the fans seem to have embraced completely.

Bu as each riveting story comes to a conclusion in the NFL news world, one remains. We’ve seen the trade of Kevin Kolb, the trade of Donovan McNabb, the signing of free agents Nnamdi Asomough and Santonio Holmes.

But yet one story continues to hang in the background. Like a room decoration sitting in the corner, the last piece to be packed into a box during a move.

The Carson Palmer situation in Cincinatti.

Without delving too deep into the setup of this dilemma we will focus on the basics. In a nutshell Carson Palmer demanded the Bengals trade him citing numerous frustrations with the organization over the years. If he did not get his wish, Palmer threatened retirement.

So as we stand, the Bengals won’t trade Palmer and Palmer won’t play football. Many have chimed in from both sides and I thought it would be a fun idea to play Devil’s Advocate and make the case from both sides. At the conclusion there is a poll where you Ranterz can be the jury on who is “right” in this situation.

Palmer had seemed to revive the long-suffering Bengals franchise. 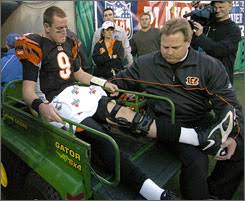 While it can easily be stated that Palmer’s numbers and performance dropped after the injury it can also be argued that the Bengals organization also plummeted.

Numerous arrests of players on the team, the actions of a loud mouthed receiver, a frustrated fan base and a constant “shoot themselves in the foot” kind of franchise can wear on a player.

Clearly, Palmer wants out of Cincy. The ship has been sinking for a while. In fact, for many years it’s been on fire and slowly sinking. Who wouldn’t want out? And in all fairness Palmer has had to deal with a ton of crap over the years.

But instead of trading Palmer and getting value the Bengals would rather let a player with value retire. Continue to pay his contract while he sits at home.

Yea. That will show him.

This is why Carson Palmer should be traded out of Cincy and why Mike Brown needs to do it not only for the franchise, but for it’s fanbase which has put up with the consequences of a boneheaded owner for years.
Argument for the Bengals

In 2005, the Bengals gave Palmer a contract extention off of his original rookie contract.They added six years to a deal that still had three to go. It provided Palmer with a chance to make $118.75 million in salary and bonuses over the next nine years.

At the time Palmer had this to say:

“Hopefully this is the last place I’ll end up playing,” Palmer said. “That’s so rare in this league these days. It’s so rare to see a person have a 5-, 8-, 10-, 12-year career in one place. And I feel very fortunate that it looks like that’s going to be my future.”

And while the Bengals had no choice but to pay Palmer regardless of his knee injury, regardless of his play you never read a report of them demanding Palmer to pay money back or restructure his deal. The Bengals, stood by Carson and paid him. Palmer’s current contract runs through 2014 and is worth over $118 million.

So in all fairness if Palmer is putting the Bengals in a hell of a position. He handcuffs them with a contract that does not match or equal what he gives the Bengals in return. On top of them he makes it far more difficult for the Bengals to be major players in free agency with the current structure of his contract.

But instead of working with the Bengals, Carson would rather take his ball and go home. It’s okay to stand and point fingers at the organization, the coaches and the owner but cannot take any burden on to yourself?

Palmer is also getting a free pass from the already miserable Bengal fan base who are ripping into the organization.

Palmer has not lived up to his contract and owes the Bengals organization and the fans a lot more than this childish attitude.

Therefore, Palmer should honor his contract or stop collecting the paychecks.

What do you think Ranterz?