A Case of the Sundays: September 19th, 2011
Advertisement

Week 2 is in the books in the NFL. Although it was a bit lackluster in comparison to Week 1 where we witnessed numerous record breaking performances, Week 2 was interesting in it’s own right.

What’s being slowly unraveled as the 2011 NFL Season is a season that is full of shocking outcomes, inflated statistics and a clear separation between the good coaches and the really good coaches.

As we saw in Week 1, a lot of teams were gassed. Not conditioned yet for the play of the regular season, partly to blame for a shortened Training Camp schedule. Unless you are the New England Patriots (which I will touch on in a bit) you found your defense consistently trailing offensive players, sucking oxygen on the sidelines and/or suffering from hamstring injuries and constant cramping.

So in this Week 2 edition of the “Case of the Sundays” we highlight the things that piqued my interest on Sunday. A big thank you to the NFL Gods who blessed us all with the NFL Ticket on DirecTV. Seriously, this is the next best thing to heaven for any sports fan. 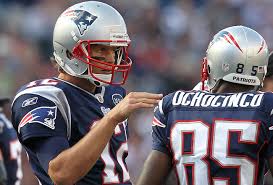 The New England Patriots Are Coached Better than Everyone

Let’s take into account my prior statement above about injuries. Most of these easily can be attributed to the lack of Training Camp. Hamstring pulls, cramping, etc. In fact I can point to last Monday’s game between the Patriots and Dolphins as a prime example of my point.

The Patriots exploited an out of shape Dolphins defense by utilizing a hurry-up no huddle offense to keep them winded and panicked. It worked to near perfection. The Dolphins defense looked gassed and gave up a record number of passing yards that makes me nauseous to keep posting (so i’ll let you look it up elsewhere dammit).

Every team seems to be a bit behind in their conditioning and rightfully so. Except the New England Patriots. They look in shape, mid-season form and clicking together. This all comes down to coaching.

Bill Belichick runs the Patriots better than any other coach in the league. No matter than cards dealt this offseason with the lockout and shortened camps, Belichick muscled threw it and had his team prepared and in shape. It’s showed the past two weeks.

It’s a Mess in Kansas City

Charlie Weiss stepping down as Offensive Coordinator was one of the biggest loses any team suffered in the offseason. Yes, bigger than the Raiders losing Nnamdi. Weiss was the mad scientist behind a Chiefs Offense that was one of the most productive in the league. His departure in the offseason has had a bigger negative impact on the Chiefs than probably they even thought.

After the Chiefs latest blowout loss to the Detroit Lions 48-3 they had another major injury blow to their roster. Last week they lost 2nd year Safety Eric Berry. Kansas City running back Jamaal Charles was carted off the field midway through the first quarter with an injured left knee. Charles will likely miss the rest of the 2011 season after an initial diagnosis revealed a torn ACL in his left knee.

Tony Romo Can Respond to Adversity

It only took him 5 years but Tony Romo finally rose to the occasion. After a lackluster start in San Francisco which saw the Dallas Cowboys fall behind 14-0 early to the 49ers, Romr suffered a broken rib and was taken out of the game, replaced by veteran reserve Jon Kitna.

Romo later returned to the game and helped rally the Cowboys back to tie the game by the end of regulation. In overtime Romo would drive the Cowboys to the one yard line where they would hit a chip-shot field goal to win and notch their first “W” of the season.

But what seemed different was Romo spreading the ball around more than he seemed to do in Week 1 against the New York Jets. He finished with 345 yards and 2 touchdowns, posting a Quarterback Rating of 116.4.

What a way to bounce back Romo. But the jury is still out until you win a big game in a crunch time moment. For now though, this should help Cowboys fans forget about Week 1 and focus on the victory over the San Francisco 49ers in Week 2.

Who would have thought that heading into Sunday’s lineup of NFL games that the Game of the Day would NOT be the Patriots/Chargers, but instead the Buffalo Bills vs. the Oakland Raiders. No, that isn’t a typo, that’s the truth.

Talk about a game that is the perfect example of the phrase “A Tale of Two Halves”, the Bills were very sub-par in the first half and it showed on the scoreboard. Their struggling offense and winded defense headed into halftime trailing Oakland 21-3 and leaving Buffalo fans shaking their heads.

But then the 2nd half started and apparently the Buffalo Bills decided to respond and respond they did. They put up 35 points in the 2nd half and came back to beat the Raiders  38-35 on a TD with 14 seconds left to play. The 38 points were the most allowed by Oakland in a loss since a 43-37 defeat to the Seattle Seahawks back in 1998.

Ryan Fitzpatrick went 28 of 46 for 264 yards and three touchdowns for the Bills, while running back Fred Jackson scored twice in the Bills’ home opener.

The Buffalo Bills are 2-0 to start the season and have breathed life into an organization that has had absolutely nothing to cheer about for the better part of the 2000s. But now comes the toughest test of all, the 2-0 New England Patriots.

Cam Newton is going to be Special

Now it’s not often you can highlight something really good in a loss. But, for the second straight week, Cam Newton threw for more than 400 yards. This time he did it against the defending Super Bowl Champions the Green Bay Packers.

Sure, the Panthers are 0-2 this year but somehow I think that despite the winless record, there is excitement down in Carolina. Real excitement.

Now I know many people, even reporters in Carolina, are saying that Newton is just “chucking the ball around” but I hardly buy into that theory. Regardless if you are just closing your eyes and heaving the ball in the air or dissecting a defense like an offensive savant the fact remains the same; 854 passing yards in your first two NFL games is not only impressive, it’s historic.

And maybe there is some merit to the argument of these sports journalists. But I tend to think it may be a little hard to have this much success by just chucking the ball around against NFL defenses. Didn’t Brett Favre make a career out of it?

And here is a little stat for these journalists who make that very case. Newton is “chucking around” the football at a 62.7% completion rate with 3 touchdowns and 1 interception. I guess he’s chucking it directly into his receivers hands, which I believe is the main job of the Quarterback position.

Regardless of what their opinion, my opinion or even your opinion is on how he is getting it done, Cam Newton is getting it done. And he’s getting me to tune into Carolina Panthers games to see him get it done the rest of the season.

So let me hear your thoughts sports fans. Do you think I’m nuts? Crazy? Or am I right on the money? Rant with me!

An Agent for Success