Lorenzo Alexander: A Force on and Off the Field
Advertisement

As the lights dimmed in Cowboys stadium early Tuesday morning so did the lights on Week 3 in the NFL Regular Season. Putting all the game scores and statistics in the books and starting another work week in the National Football League.

The Washington Redskins would come up short in their effort to knock off Tony Romo and the Dallas Cowboys 18-16 in Arlington, Texas. A disappointing loss for a Washington team who has surprised everyone with their 2-1 start to the season. But Tuesday would mark the dawn of a new week for the Redskins and it was time to go back to square one and prepare for their upcoming game against Sam Bradford and the St.Louis Rams.

Being able to turn the page after a tough loss is something veteran linebacker Lorenzo Alexander of the Washington Redskins has learned to do in his 5 years in the NFL. Alexander already has his sights set on how to effectively stop a young Rams offense.

“From a defensive perspective the best thing is to limit the run and Steven Jackson’s impact on the game. He is still one of the best backs in the league as a threat in the running and passing game. We also have to frustrate and hit Bradford as much as possible.” Alexander said

“He is one of the best young qbs in the game. He beat us last year and if we give him time, he’ll do it again. On special teams I think its just doing the little things right.  The
last 2 weeks we have had a field goal block. “ And so starts another difficult week for a defensive player in the NFC East. A division with not only some of the best Quarterbacks in the league in Tony Romo, Michael Vick and Eli Manning, but a division where each quarterback is almost completely different from the next. A heck of a task for any defensive coordinator and player to gameplan for.

“It’s definitely hard because all of them are talented. Each of them has their strengths and weaknesses but the key to stopping any Quarter Back is being able to apply pressure with your 4 man rush, especially if the opposing team has great weapons on the edge like a Dez Bryant, DeSean Jackson or Hakeem Nicks. It allows a coordinator to rely less on blitzing and gives them  the ability to double guys.”

Lorenzo Alexander has been with the Washington Redskins since 2006. Being able to make adjustments has not only been a requirement of him from game to game but also from an organizational standpoint.

In 2010 the Redskins made a switch from Jim Zorn to former Denver Broncos head coach Mike Shanahan. Shanahan is in his 2nd full season and Alexander has already liked the changes;

“It’s been great because there is a sense of accountability throughout the team and organization. And even though some of my closest friends have been casualties of their personnel changes, they have brought great guys in who are both good players and good people.”

Alexander has also benefited from the new scheme implemented by defensive coordinator Jim Haslett who came in amidst all the changes. The switch to a new 3-4 defense suited Alexander well and he had his best season in 2010 with 57 tackles, 1.5 sacks and 3 forced fumbles.

“Haslett has a great scheme but I believe it’s the opportunity that has been afforded to me by this coaching staff. I have always been productive but in a limited role, but as i have developed and earned the trust of coaches, especially Danny Smith on special teams, I have more opportunity to make plays.”

Lorenzo Alexander also points to his teammate London Fletcher who has made an impact on the Redskins Linebacker. Alexander lists Fletcher as a defensive player he admires most in the league:

“Hands down, London Fletcher and yes it may be biased, but I have a chance
to see him daily. He is an ultimate pro in how he approaches and studies the game and makes plays. But beyond that, he is a great man husband and father.” 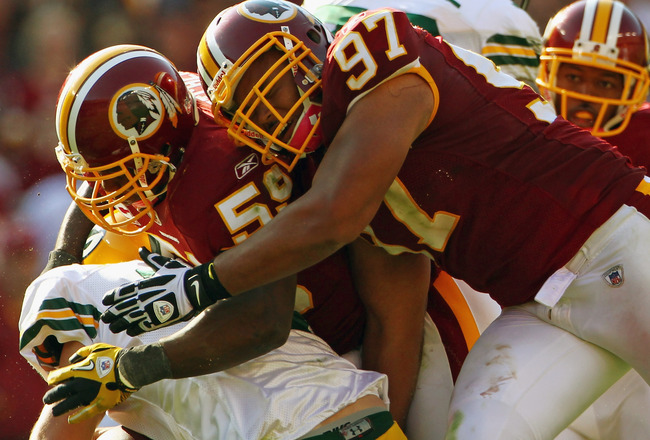 Alexander has always been a fan of defensive players. Growing up his favorite player was Hall of Fame cornerback Deion Sanders.

“I loved his swag and the persona he created and lived up to it. I loved the fact that he was a multi-sport athlete. He could have two-pick and punt return for a touchdown in the NFL, then take a quick helicopter ride and have a double, triple, several stolen bases and be a monster in center field in the MLB.”

But Lorenzo Alexander is not only a hard worker on the field but also off of it. He is also a hard worker for the ACES Foundation. The ACES Education Foundation is a non-profit charitable organization that supports ACES programs and services.

“It has really exploded over the last 2 years as exposure has grown. But it is an awesome feeling to be able to give back to my community in the DMV and my hometown of Oakland. if people want to get involved go to lorenzoalexander.org and follow us on Twitter @aces_foundation.”

But his hard work of giving back doesn’t stop there. Alexander is also working with JR Rickert’s “Year of the Fan” which not only connects athletes with fans but also rewards fans for their loyalty with great memorabilia giveaways.

“Obviously, the fans are what makes the game so great today and every year could easily be the year of the fan. But after putting the fans through and lockout, we as players and a league need to show our appreciation.

So through out the year i will be giving away game worn apparel, one man gang gear and a grand prize bowling party with me. Only way you can qualify though is to “like” my facebook fan page and sign up for the weekly drawings.”

It’s clear that Lorenzo Alexander‘s impact has not only grown on the field but also off the field. His hard work and charitable dedication has made Alexander a player that’s easy to root for.

Alexander represents a player that values community, loves the game of football and values the connection with the fans. In a world that sometimes has some disconnect between the sports fans and the players, Alexander shows that some athletes are working hard at bridging the gap. ~by Anthony DiMoro

A fan of the Washington Redskins? Check out our Redskins Fan Group – Click Here

Special thanks to Melanie Madden and JR Rickert. Visit them here