Who could have predicted the NFL season unraveling like it has. With that being said I thought it would be great to put a 2 part series together highlighting the things in this NFL season that haven’t been what many may have originally thought they were.

For those of you wondering where this week’s “A Case of the Sundays” is, I had to take a break, Halloween is my favorite holiday and for a day sports took a back seat to my other obsession; horror movies.

It’d be a bit easier to highlight the teams such as the Cincinatti Bengals or the Miami Dolphins but I thought it’d be best to go a step further and focus on player performances, both the surprising and the disappointing.

So in Part 1 of this series I will focus on the the player who have disappointed me and have me saying….One Second Thought…..

Chris Johnson (Tennessee Titans)
Easily the top of my list and it goes without any debate. It seems Johnson is on cruise control since getting his big payday and frankly he proved to the Titans what they were fearing all along while negotiating with Johnson.

Some would say it’s an example of him breaking down from his aggressive style of play, others suggest that a change in his running style has been the catalyst for his horrid season. But regardless of the reason, Johnson is not worth a penny of his new deal with 302 rushing yards, a touchdown and only a 2.8 yards per carry average. Wow that’s pretty horrible right?

I tend to think that it has little to do with any of the general criticisms. His running style for instance shouldn’t be a big issue. Let’s face it, his “plow over” style was eventually going to be figured out and with the defenses the Titans face in the AFC it should come as no surprise that eventually they’d find a little more success in defending him.

So Johnson did what was natural. If something isn’t working, try something a little different which would explain his increased tendency to run outside the tackles.

But what Johnson lacks more than anything is the same burst and explosion he possessed in previous years. Let’s face it, the guy is only 26 so I doubt wear and tear is as big of a factor as everyone would like to believe.

For a player who became a bit of a YouTube sensation for his race challenges and boasts of being the fastest player in the NFL Johnson looks like a guy who spent all offseason counting his dollars instead of putting work in on the field.

Tim Tebow (Denver Broncos)
Finally we can say it aloud in unison…Tim Tebow IS A HORRIBLE Quarterback. But how surprising is this?

Maybe to the pundits at ESPN who were treating Tebow like Lebron James for a bit, but not to any intelligent fan. Tebow just doesn’t have the mechanics to perform at even an “average” level in the NFL at the quarterback position.

I am sure it breaks a lot of hearts in Tebow-land and may break some diehards out of mid-Tebowing (a stupid craze that started recently) but for me personally I am glad that the world is finally seeing what many fans just like me knew since the start….Lightbulb! Phillip Rivers (San Diego Chargers)
Talk about being a completely different player. Rivers was a lock in Fantasy Leagues year after year and I personally won a League with him in 2008. I even drafted him this year with my 1st overall pick (over Tom Brady, oops)

But Rivers looks not only completely inefficient this year, he looks rattled and confused. Poor decision making has never been in the same sentence as Rivers but it certainly can be a just statement this year. 2,084 yards, 7 touchdowns and 11 interceptions. Yikes!

But in all honesty let’s face facts. Rivers has been a bit lost without Antonio Gates at 100% and who knows if Gates will ever be 100% again. That foot injury could be career-ending.

On top of that Rivers’ biggest playmaker Darren Sproles was kicked to the curb in the offseason. Bet the Chargers would love to have him back huh? 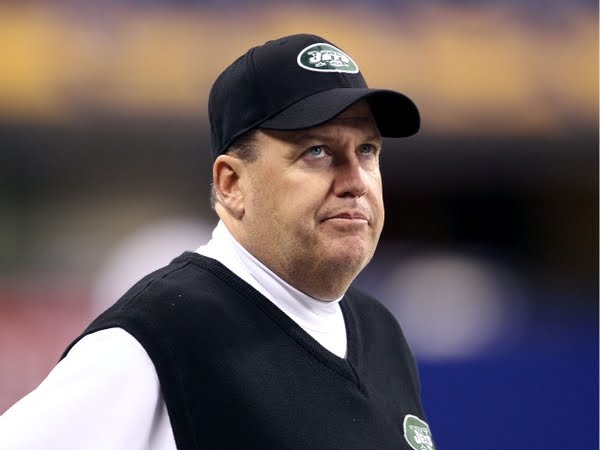 Rex Ryan (New York Jets)
Yes I put a coach in here and it won’t be the only time. But Rex Ryan certainly took a step back performance with this year.

His boasts of Super Bowl trips and Lombardi Trophy hoisting has been almost an annual event but this year even the Jets look like they aren’t buying it either.

Ryan put all his stock in veteran players cast off from other teams and it seems like it’s finally catching up with him.

Bart Scott who was a big impact on that defense is now almost a detriment and Ryan has to hide his shortcomings in packages. Plaxico Burress has had one game this season where he had stats worthy of being a #2 receiver, the other games: Non-existent.

Ladanian Tomlinson is a non factor and Ryan isn’t even using him correctly. Maybe it’s age or maybe it’s Shonn Greene‘s emergence as a feature back. But it goes to show that not only are Ryan’s antics ineffective this year but also his roster. Mark Sanchez doesn’t look like the great quarterback Ryan would like everyone to believe he is.

This year was supposed to be a breakout year for the Dolphins defensive unit but it has hardly been the case. In fact it’s not even close. The Dolphins are a 23rd Ranked defense and are laughable when defending the pass.

It’s easy to point to injuries as the main factor but I tend to shine more of the light towards Nolan. It’s clear that while most players took the initiative in the offseason to get together with teammates and get on track, the Dolphins sat on their asses. That is why you see all the lingering hamstring injuries and conditioning issues. That falls on not only Mike Nolan but Tony Sparano.

While other teams took the initiative, the Dolphins defensive players took a vacation. The jury is still out to determine if the above mentioned players still believe they are on vacation.

And hey, if you’re going to vacation then maybe hitting the casinos in the world famous city of Las Vegas or catching rays on South Beach in Florida can give you the ultimate rest and relaxation. Dez Bryant (Dallas Cowboys)
Boy oh boy was I wrong in my predicting that Dez Bryant would be an elite receiver this year. It’s been a slow process for Bryant to get the motor running. Slow is putting it kindly.

But being a #1 receiver in Dallas calls for much more production than 22 catches and 4 touchdowns.

But what leaves me and Dallas Cowboys fans scratching their heads is how Bryant seems to be forgotten in the offensive gameplan. His gameday targets have increased slowly but at one point int he season Bryant hadn’t been targeted more than a dozen times through a handful of games.

Is it more Dez Bryant, Tony Romo or Jason Garrett? Mike Shanahan (Washington Redskins)
Is the clock ticking in the nations capital? It should be.

Mike Shanahan was to be the savior for the Washington Redskins. Shanahan came into an organization with a lot of money to spend in free agency, an aggressive owner and a young defense on the rise.

But a self-proclaimed Quarterback guru can’t find an answer at quarterback. That’s putting it mildly. Shanahan has been atrocious at quarterback selecting this year. It makes me question if they guy knows his ass from his elbow when it comes to selecting a signal caller.

Rex Grossman, John Beck…who is next?

What’s even more troubling is the failure on the Redskins part to obtain a viable quarterback in free agency or trade, like David Garrard or Carson Palmer.

Joe Flacco (Baltimore Ravens)
I’ve spent a good amount of tie ripping the performance of one Joe Flacco on my radio show the past two weeks, so you have to assume he’s be a lock for my list.

Flacco has continued his regression since his stellar rookie season. But the numbers that really make me worry about him is the completion percentage.

Completion percentage is a great way to determine how well a quarterback is making his reads, adjusting and making good decisions. But Flacco’s percentage has been on a steady decline each season.

Maybe it’s the lack of a deep threat or a solid tight end but whatever the case is Flacco is a solid disappointment this year. Certainly when they gave up what they did to the Eagles they were expecting Kolb to give a better ROI than what he has so far. So what did the Cards get? They got 1,706 passing yards, 8 touchdowns and 8 picks.

But in reality Kevin Kolb is just being (and playing) what Kevin Kolb truly is and has been all along. A backup quarterback Andy Reid (Philadelphia Eagles)
This goes without saying. With all the noise the Eagles made in the offseason and the proclamation of Wonderlic Super Genius Vince Young (“Dream Team”) things were a lot sunnier in August for Andy Reid in Philly.

But a slow start, a decline in the production of Michael Vick and the rather ineffective impact of almost all of their offseason acquisitions has made Philly a tough place for Reid.

Although in recent weeks the Eagles look to be finally getting on track it still has me wondering if Andy’s Dream is now officially a Nightmare. Ndamukong Suh (Detroit Lions)
After a phenomenal rookie campaign in 2010 Suh has hardly been the same player in 2011. The Detroit Lions defensive prodigy has took some hard hits this year not only on the field but off the field.

Instead of earning praise for his on field impact Suh has been the ire of criticism for being a dirty player.

Instead of combating it on the field, Suh has been doing so in the press. I guess when you have only 22 tackles and 4 sacks it’s easy to see why he hasn’t grabbed many headlines for his play.

Suh is beast that needs to get back into “beast mode” if the Lions want to make a deep run in the playoffs.

On a side note….
For those of you who are wondering what the big fuss is about SportsRantz.com, check this video. See what we have going on!!