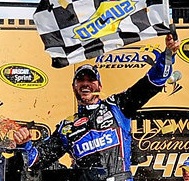 This maybe 2011 but Jimmie Johnson is still the same driver he has been through 5 championships. And this should definitely worry all the Chase drivers, because he is on the mission to be in the league of his own. Johnson led the majority of the laps Sunday (197 laps), as he dominated yet another race in pursuit of his sixth-straight championship in the NASCAR Sprint Cup Series.

The finish of the “Hollywood Casino 400″ was just what the doctor ordered, as most race fans were sick and tired of the same fuel-mileage finishes that has seemed to plague the sport we have come to love.

Even though Jimmie Johnson led the majority of the race, he did face a challenge in the closing laps of Sunday’s 267 lap race, as Kasey Kahne attempted to score his first victory in the No. 4 Red Bull machine before he joins Hendrick Motorsports next year.

As in most races during the latter part of the year, the Roush Fenway bunch seemed pretty confident heading into Kansas this weekend, as their practice and qualifying performances were spot on. Granted, Greg Biffle and Matt Kenseth dominated the first quarter of the race, it wasn’t enough as the Hendrick Motorsports cars stole the show.

Kenseth did lead all Roush Fenway drivers with a fourth-place finish Sunday, as he remains in contention for his second NASCAR Sprint Cup Series championship.

Even though Johnson was a favorite to win this past weekend, we all know that doesn’t constitute a win. Most felt that way as the uncertainty of what type of finish would affect the outcome of Kansas Speedway. “We’ve got a very strong group of guys and we’ve been knocking on the door all year long,” said a smiling Johnson in Victory Lane.

Not only was this a big day for the former five-time NASCAR Sprint Cup Series champion, but it was also a big day for both Hendrick Motorsports (celebrated win No. 199) and Chevrolet Racing (wins NSCS manufacture’s Cup).

On if Johnson thinks championship number six is right around the corner, “We’re doing the right things. Sure, this is a huge step in the right direction, but in six races a lot can happen.” It sure seems as if Johnson is back and if that’s the case, the present points leader (Carl Edwards) among others, should be concerned.

The rest of the top-five is as follows: Kasey Kahne, Brad Keselowski, Matt Kenseth and Carl Edwards. As most have come to expect, Sunday’s race at Kansas shook up the points standings once more, as Edwards leads the points heading into Charlotte next weekend. So Dorothy and Toto will tap the shiny red shoes and poof we are out of Kansas!

Wheels up to Charlotte where Kasey Kahne has dominated before I look forward to seeing the Chase shake up yet again for another week. Who will take the cake?

Charlotte is Shaking It Up