So far during the 2011 NASCAR Nationwide Series season we have seen a lot of drama and Tuesday was no different! Sorenson was not only fired but yet it happened over the phone and Reed Sorenson has one win, seven top fives and 18 top tens in 29 races. With just five races left in the year, Sorenson is third in points, just 49 markers behind Ricky Stenhouse, Jr.

“I’m not really sure what’s going on,” Sorenson, who has four career Nationwide Series wins, said. “It’s not good, though.” No reason was given by Turner Motorsports on why Sorenson was released other than purely making a move to get Brian Vickers back.

He will be replaced in the car for the next two weeks by Red Bull Racing’s Brian Vickers. More to come on Vickers’ comments later in the article. But this is what Turner Motorsports had to say and what their future could look like, a slim future.

“We are continuing to evaluate our racing program as we look to the 2012 season,” owner Steve Turner said in a statement on Tuesday. “Brian Vickers is a proven winner at NASCAR’s highest level in addition to being a (part-time) driver at Turner Motorsports over the last four seasons.”

The statement goes on to say “we are confident Brian can help assess where we are, as a company currently, and the direction we are going as we build our programs for 2012 and beyond.”

Turner Motorsports also told employees that possible layoffs were coming. In accordance with the North Carolina Worker Adjustment and Restraining Notification, or WARN, Act, the team has to notify employees of layoffs 60 days in advance. Turner is among several Camping World Truck and Nationwide Series’ teams that have done so. 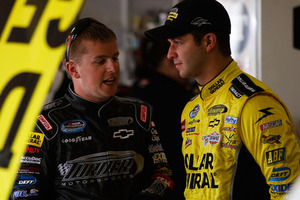 Sorenson drove 28 Nationwide Series races last year for Braun Racing, which was later bought by Turner Motorsports, in 2010, collecting nine top fives and 21 top 10s. Despite missing seven races, Sorenson still managed to finish 12th in the standings. Sorenson’s teammate Jason Leffler is also looking for a ride in 2012. His sponsor GreatClips will be leaving Turner at the end of this season, and Leffler was already told he would not be returning to the No. 38 car. Leffler has finished in the top ten in Nationwide Series points for the past five years.

So lets look at the Brian Vickers side to this move:

Vickers previously competed in the Nationwide Series for Turner Motorsports on a part-time basis from 2007-2010. In 41 starts, Vickers compiled 15 top-five and 28 top-10 finishes along with three pole awards. Vickers has made four Nationwide Series starts at Kansas Speedway, notching one top-10 finish back in 2007 while driving the No. 10 entry for Turner Motorsports.

“I can’t thank everyone at Dollar General and Turner Motorsports enough for this opportunity,” said Vickers. “They have been so supportive of me both personally and professionally over the past few years, and it’s great to continue this relationship for a few more races. I am looking forward to driving this new Nationwide Series car with Trent and the guys behind me!”

The No. 32 team remains under the leadership of Trent Owens, the same crew chief Vickers worked with during the majority of his time at Turner Motorsports.

Nationwide Drama continues and a lot more unanswered questions have arisen from this bombshell on Tuesday!