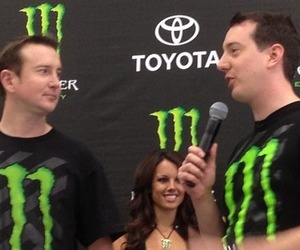 Kyle Busch Motorsports announced today that they have signed a multi-year partnership with Monster Energy Company to be the primary sponsor of the team’s new No. 54 Toyota Camry in the NASCAR Nationwide Series.  And then the question was: Who will race the #54 Toyota Camry? Well, the driving duties will be split by Kyle Busch, owner of KBM, and his brother Kurt, the 2004 NASCAR Sprint Cup Series champion.

The season opener at Daytona International Speedway will be driven by Kyle, as well as the next four races through California before the brothers will split the driving duties. KBM will attempt to accomplish the same feat in their first season in the Nationwide Series that they did in their first year in the NASCAR Camping World Truck Series in 2010, capture the owner’s championship.

“Since debuting in NASCAR, Kyle Busch Motorsports has had the goal to add a championship-caliber Nationwide Series team to our organization,” said Kyle. “With today’s announcement of Monster Energy as primary sponsor and my brother Kurt as the second driver, we’ve accomplished that goal.”

In nine seasons ( a total of 222 starts) Kyle has not only set the series record with 51 career victories, but also recording the most wins in a single season with 13, back in 2010. Kurt has also been successful on NASCAR’s “second circuit”. With three career wins in only 12 starts, the elder Busch brother has seemingly been a force to reckon with, much like his younger brother.

“Kyle has done an impressive job in building this race team and I’m proud to be a part of it,” said Kurt. “He won a Truck Series Owner’s Championship in his first year and his team has kept on winning ever since. His expectations are the same as mine, and we know each other better than anyone. We’re driven to win, and with Monster Energy driving us, we’ll be a tough team to beat.”

Kurt, who announced earlier on in the month that he will compete in “marquee” Nationwide events with his Sprint Cup Series team, Phoenix Racing who fields Chevrolet’s, will be competing against his brother in the season opener at Daytona. “Monster Energy has always stood for competing and winning no matter what the sport,” said Monster Energy Company President, Mark Hall. “With the Busch brothers sharing the wheel of the Kyle Busch Motorsports Monster Energy Camry, we have every reason to believe we have drivers capable of running up front every weekend.”

Recently departed crew chief from Roush Fenway Racing, Mike Beam, will sit atop of the pit box for both brothers will competing in the No. 54 Toyota. “I am excited to join the KBM team and to have Monster Energy as our sponsor,” said Beam who is coming off the 2011 Nationwide Series owner’s championship from the No.60 Roush Fenway Ford. “Kyle and Kurt are two of the best drivers in NASCAR. To contend for the 2012 NASCAR Nationwide Series Owner’s Championship with Monster Energy and to have all of the elements in place that make  a great team, you can not help being excited to be a part of this.”
Surely, the “band of brothers” will be a massive force in the 2012 NASCAR Nationwide Series campaign; but yet we aren’t too sure as to which drivers we will see. Will we have Kyle and Kurt or Rowdy and Bash competing in the NASCAR Nationwide Series? Only time will tell and I am looking forward to see this team’s season start and see how well they perform.

The Indy 500 Without Danica Patrick?